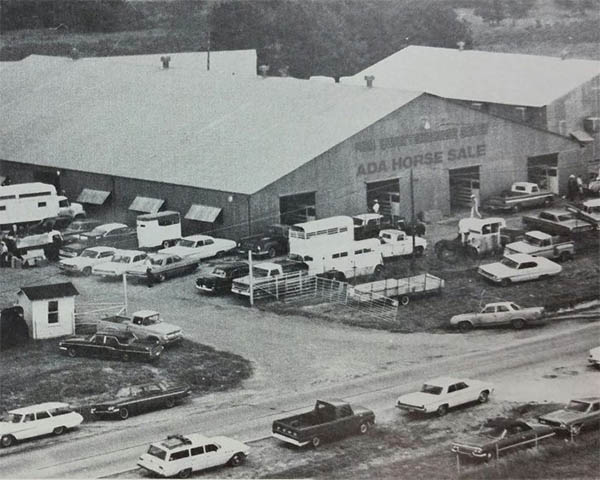 Brothers Pete and Kenneth Winters became the principal operators.  After remodeling the size of the horse stalls, Ada Horse Sale was created.

The Winter brothers knew nothing about running a horse sale. So they went to horse sales at Fort Smith, Arkansas and to the Robertson brothers’ Haymaker Sales Company in Oklahoma City, to see how it was done.  They learned their lessons well.

The first sale was held on Thursday, August 23, 1962, and had 138 head of horses. It turned out to be a big success.  So it was decided to have four sales a year; March, April, August and November, on Friday and Saturday nights.

There was hardly any place to sell a horse back then other than a regular livestock auction, so they decided to start charging the first-ever consignment “entry fee” and utilizing that to advertise the sale heavily to the public. They decided to charge $100 for the entry fee then a 5% commission fee of the horse’s purchase price.  The Winters advertised in the fledgling Quarter Horse Journal and other periodicals.

The consignment and commission turned out to be a really hard sell at first, but many people began to come to see how well the horses sold and what they sold for.  Word spread.

In order to expand the business, the brothers bought a lot of horses and sold them through the sale ring.  Before long more stalls had to be built, bringing the total to 525 stalls.

Ada Horse Sale was in the perfect location. Ada had a racetrack, Ross Meadows, South Central Oklahoma had a lot of horses, plus they could draw from northern Texas.

The Ada Horse Sale motto was “the sale built on fact, not fiction” and every customer received their personal attention.  Sellers were paid the day of the sale.  The majority of sales were Quarter Horse, but they annually held one of the top Appaloosa Horse sales in the Midwest.  They also held Paint Horse and Thoroughbred horse sales.

Special sales or benefit auctions were held in conjunction with regular sales.  One was held for Darrell Rose, who was at that time breeding manager for Oklahoma Quarter Horse Hall of Fame Inductee Roy Browning Ranches in Ada.  He had was previously worked for Oklahoma Quarter Horse Hall of Fame Inductees Rowland Stanfield Jr and Robert “Bob” Moore.  Rose needed a heart transplant.  The benefit raised over $86,000.

There were buyers and sellers that attended from almost every state in the nation, Canada and Mexico.  The sale ran continuously from 1962 until it was sold in 1982.  Pete and Kenneth decided to sell the facility and do something different.  Unfortunately, the new owners only lasted one year after it was sold.