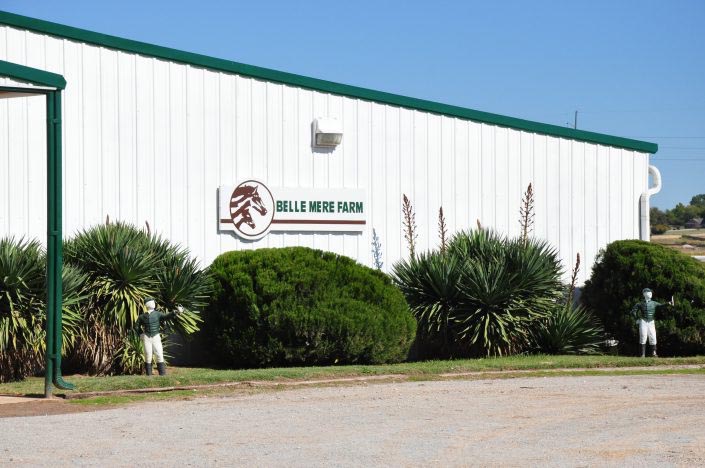 At one time, Belle Mere Farm Ltd. was one of the largest breeding farms in the Southwest.  Owned and operated by Betty and her husband, 2010 Oklahoma Hall of Fame Inductee, Dee Raper.  The early beginning was a farm just outside of Lexington, Oklahoma in 1983.  The name for the farm came from a friend who was looking up the farm location on a map and told them about a man-made lake in that area that was called Belle Mere.

In 1992 the farm moved to its present location in Norman, Oklahoma.  Over the past 50 years, Dee and Betty personally have been hands on every day and in every aspect of the farm operations.  Belle Mere has a reputation for providing excellent care.  Their trusted friend and co-worker Phyllis Norvell has worked as their bookkeeper with them on the farm for 36 years.

When asked “who was the favorite stallion of all time”, they both said 2015 Oklahoma Quarter Horse Hall of Fame inductee Bully Bullion.  He stood on their farm for 32 years and was considered a part of the family before he passed away in 2014.

When asked which stallion they handled over the years had the greatest impact on the Quarter Horse industry, they both responded that it had to be Mr Eye Opener who was a great sire of racehorses, but also one of the top broodmare sires of all times.

One year they stood 13 stallions on the farm.  There were years in that era when they bred as many as 1200 mares in a single year.  In the early ‘90s after they moved to Norman there were a few years when they had as many as 700 mares on the farm during a single breeding season not counting mares that were bred off the farm with shipped semen, and it was not uncommon in those years to have upwards of 400 of those mares on the farm at one time.

Belle Mere Farm is a name, a place, but what warrants the farms induction into the Hall of Fame is the people.  All the while running this major breeding farm, and ensuring the highest caliber of care for the horses that came through their facility, the Rapers also found time to volunteer their time and support to serve the horse industry. Both Dee and Betty are life members of OQHRA and Dee served as president of OQHRA from 1993 through 2001.  He and Betty have worked tirelessly in and for the Quarter Horse industry.