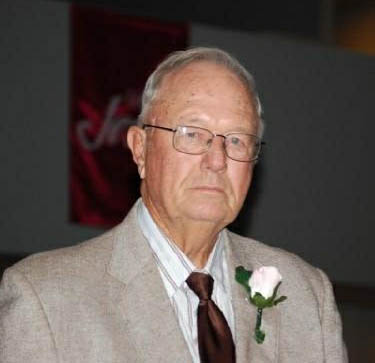 Carl was born December 10, 1933, in Oketah, Oklahoma.  He was the middle of three sons born to Theo Henry Pevehouse and Edna Marie Jones Pevehouse.  He graduated from Oketah High School and attended Oklahoma A&M. Carl served in the U.S. Army during the Korean conflict.  Carl and his wife Rozella met in church where he was a part time preacher, while making ends meet selling windows and siding and they married in 1955.  Carl and Rozella raised three children, Cheryl, Tammy, and Curtis.  They built their home on 132 acres of land on the outskirts of Ratliff City, Oklahoma and Carl started an oilfield supply company.  In the early 1960’s there was a new breed of cattle coming to the US.  Carl was one of the first to bring the Charlois cattle to his ranch in Oklahoma.

Carl had been raised in a time when young people were taught to work hard.  Being the middle brother, he had a naturally competitive nature and in school he played basketball and track.  He was always ready to run a foot race so he could win!

When he was only nine years old his dad let him trade his steer for a little mare called Spot.  Many fun times were had as he and his friends challenged each other to see who had the fastest horse.  Carl remembered happily that he never got Spot outrun while he owned her.  Ultimately, Carl’s folks packed up the family for a move to Colorado and he had to sell Spot.  None the less, the bug of racing fever had bitten him, and throughout the rest of his life fast horses remained one of his passions.

About 1974 or 75, Carl had a neighbor who owned a little mare named Threes Gal.  She had produced several daughters and Carl was longing to own a couple of those fillies.  Ultimately one morning the neighbor told Carl he was ready to sell a couple of those fillies and wanted them gone quick before he changed his mind. They struck a deal and Carl took Dough Girl and Everetta Gal home that afternoon.  Carl saved up $2500 to breed Dough Girl to Tinys Gay and he was thrilled when his first homebred foal was born early in 1977.

Carl was still musing over a name for his filly when he went to Delta Downs for some races.  He heard an owner chanting to one of the horses racing “Come on baby! Send me candy, baby, send me candy”.  On the drive home he was thinking about his new baby, and he knew what he was going to name her.  After that almost every horse he raised had “Candy” in the name, and Send Me Candy became the blue hen for his band of mares that led to an impressive list of homebred foals.

The story of Carl’s successful breeding program was almost a story that didn’t happen.  In 1976, Carl was diagnosed with myocarditis, a virus which attacked his heart muscle and put him in ICU for 28 days.  Ultimately, 19 years later the lingering damage to his heart from that virus caught up with him while on an oilfield equipment buying trip to California.  He made it back to Oklahoma where he placed on the list for a heart transplant. Carl’s new heart came when a 16 year old youth lost his life in Colorado.  Carl never forgot the gift from that young man and his family.

After the transplant, Carl went right back to work running his business and breeding fast horses to continue the “Candy” line.  He bred many six figure winners in the next 17 years, including This Candys Red Hot, This Candys Okay, Candy Cartel, Ima Candy Suspect, I See Candy Paint, and Haulin Candy Salt.  But of all the horses, the most special may have been Send Me Candys second foal, Send Me The Candy, who was foaled in 1994, the year before Carl’s transplant.  He had been down and out for some time after his illness and was getting short of money fast.  He had Send Me The Candy in the Remington Park Futurity.  She set the fastest time, and came back and won the futurity.  Carl said “there’s nothing like a good piece of Candy at the just the right time!”  When asked about what was his next goal, he responded saying “naturally I’d like to win a million dollar futurity” then he paused, smiled and said “my day’s a-comin.”

For over 30 years, he was a member of the American Quarter Horse Association and the Oklahoma Quarter Horse Association, where he served on the Board of Directors for several years.  Carl was named Champion Oklahoma Owner and Breeder many times from 2011 through 2015.  The rest of this sweet story is that although Carl lost a tough battle against cancer, and while he didn’t live to see his dreams come true, a Send Me The Candy daughter, Jess Send Candy produced a phenomenal son, Jess Good Candy and in 2015 Jess Good Candy won the “more than a million dollar”  The All American Futurity.  His beloved wife Rozella and his children have continued his legacy by continuing to breed and race those “Candy” horses.