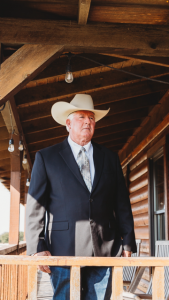 The late Doug Carpenter was born March 20, 1956 in Attleboro Massachusetts to Jesse and Jacqueline Carpenter, he developed a passion for horses at a young age. When he was 13, Carpenter hitchhiked to Columbus, Ohio, to experience the 1970 All American Quarter Horse Congress. Although he slept on bleachers in the Coliseum and knew he would return to angry, worried parents, he was hooked, and knew one day he would show horses at that prestigious horse show.Doug left home in 1972 to live with Jack Farrell and his family in Connecticut, where he honed his horsemanship skills. Legendary trainer Tommy Manion took notice. Carpenter turned down a job offer from Tommy in 1976 for another opportunity, but two years later found himself working for Manion. In 1978, Tommy assigned Carpenter an un-broke 2-year-oldmare in June to train and finish for the Congress Western Pleasure Futurity in October. Showing for the first time at that year’s Congress, Carpenter rode the 2-year-old Good Lookin Babe to a reserve title and a check for $10,000, beating his boss, who came in third.A few years later, having grown frustrated with showing, Carpenter decided to trade horses for NASCAR and move to North Carolina. Thinking the 1981 AQHA World Championship Show would be his last, he didn’t even bother to change out of his work shirt when he showed Karen Sullivan’s 3-year-old mare, Miss Docs Melody, in the first go of junior western pleasure. He placed first in the prelims and came back in front of a crowd of more than 6,000 people to win his first AQHA World Championship. Needless to say, Carpenter ended up staying with horses.As a professional trainer, Carpenter trained and showed clients’ and his own horses, including the NSBA Hall of Fame stallion Hotrodders Jet Set, proving he had the knack for picking good horses and training them to be competitive.His training skills took him to John Mulholland in 1982, where there were many top showmares as well as promising 2-year-olds and yearlings, including the great Ms MBJ Mudlark, whom he showed successfully. After tiring of the show arena, Carpenter partnered with Keith Whistle in 1987, where he would prepare horses for the show arena for Keith as well as for amateur and youth riders.Carpenter had $70,890.89 in lifetime National Snaffle Bit Association, earnings, but the horses whose reins Carpenter touched tell the greater story of his great eye and matchmaking skills. Just some of those horses he interacted with were: Miss Docs Melody, Hotrodders Jet Set, Sheza Kinda Fancy, Time To Cash In, Docs Bo Doll, Racy Rumors, Paint Me Zippo, Cuition, Miss Surely Bars and TNT Fluid Fred.In 1996, Doug and NSBA editor Carolyn Pryor teamed up to publish Western Pleasure: Training and Showing To Win, the essential book on training and competing in the Western Pleasure discipline that became an industry must-have for exhibitors everywhere.1
Doug Carpenter, Sulphur OK He moved to the Western performance horse world in the early 1990s, representing and selling standout individuals such as 1992 NRHA Futurity Open Champion Boomernic, 1999 National Reining Cow Horse Association Snaffle Bit Futurity Champion Smart Zanolena, 2003 NRCHA Snaffle Bit Futurity Champion Chics Magic Potion and 2007 World’s Greatest Horseman Champion Light N Fine. He also bought or sold other top performers including Jac Be Quick, Roosters Wrangler, Hes Dun his Time, and Bueno Chexinic. As an owner, Carpenter earned $89,927 in lifetime NRHA earnings, in addition to $30,839 as an open rider.Doug made incredible contributions to NRHA in numerous ways. He served on the NRHA Board of Directors and Executive Committee for several years. While contributing as a Gold level donor to the Reining Horse Foundation, Doug created revenue and recognition for the Foundation through the Celebrity Slide with the Professional Bull Riders and the ‘Make a Wish’ Foundation in Oklahoma City. He was instrumental in the push for global recognition of our sport, including reining’s acceptance as the first Western discipline recognized by the Fédération Equestre Internationale.In 2018, Carpenter began providing support to the NRHA Markel Futurity Sales, which flourished under his long-time relationships throughout the horse industry and vision for achieving big goals.Doug liked to work behind the scenes. The contributions he made to this association and its members may never truly be seen. He was a mentor to so many people in the industry, and a trueambassador for the sport.Carpenter was also one of the visionaries behind the NRHA Futurity Challenge, the goal of which is to substantially increase the purse at the NRHA’s most prestigious event. In 2020, the group managed to double the added money for the Adequan® North American Affiliate Championships, guarantee $60,000 to the Futurity Level 4 Non-Pro winner, and awarded a historic $250,000 to 2020 Futurity Level 4 Open Champions All Bettss Are Off and Andrea Fappani. Thanks to the momentum he helped create, the 2021 NRHA Futurity Level 4 Open Champion will win an unprecedented $350,000.Carpenter, the quintessential horseman with an eye for greatness, continues to impact the industry through the many horses he bought and sold, and with his legacy of working tirelessly to promote reining, and reiners.Outside of business, Doug enjoyed hunting, traveling, trail riding, photography, and most of all, spending time with his family, his wife Gwen; daughters, Katie Carpenter, Kelly Treptow, Son-in-law, Matt Treptow; granddaughter, Emma; sister, Cindy Chabot, and brother-in-law, Alan Chabot. On November 20, 2020, Doug passed away from complications of Covid-19 at the age of 64.Doug was inducted into the 2021 National Reining Horse Association Hall of Fame and the 2022National Snaffle Bit Association Hall of Fame