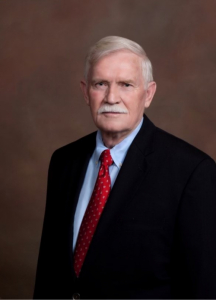 After graduating as a Valedictorian from Perkins High School, he went to Oklahoma State University where he graduated number one in the College of Agriculture and was chosen as a Top Ten Senior at OSU. After graduation, Bob taught two years at Blackwell High School, then he was ask to help develop a horse program for Lamar Community College. Bob developed the curriculum, helped secure funding, and helped plan the facilities for the new program. While Bob was at Lamar, the Horse Program was featured in the Quarter Horse Journal and Bob was select as an Outstanding Educator of America.

Both his dad and step-dad were racehorse trainers, but he knew that was not his path. So he decided veterinary medicine might be the way to be involved with the racing plus have a different profession other than training.

After serving as Department Head of the Equine Program at LCC, he returned to Oklahoma State University (OSU) to pursue a degree in Veterinary Medicine. While completing his course work to apply for Veterinary School, OSU approached him to implement a horse production class, which had been absent from the curriculum for fourteen years. Bob taught high school, community college and then OSU’s horse production class before earning his DVM degree from OSU in 1983.

In order to have a well-rounded team, he started recruiting young people with registered American Quarter Horses competing in Oklahoma High School Rodeos,, Little Britches Rodeos and American Horse Show Association Shows (United States Equestrian Federation). Then he visited ranches and requested families with youth to consider fitting their horses for youth halter competition. Story sought great professional horsemen like Jerry Wells, Dale Livingston, Laureen McKenzie and Neil Gwaltney to help with the finishing touches. Story cultivated a healthy team spirit and by the end of the completion, OJQHA had complied enough points to win their first AJQHA Team World Championship. In the fall of 1979, Story had been accepted into Veterinary School so he had only planned one year as coach. The OQHA Board members were overjoyed with the win, but the same board member considered it a fluke. Bob decided to try it again!

The Van Dorn family, Edmond OK provided human and equine accommodations for a weekend workshop with professional horsemen and women. In 1979 the OJQHA Team was again victorious at the AJQHA World Show!

After graduating Phi Kappa Phi from OSU Veterinary School, Story worked as a racetrack veterinarian for 30 years at Ruidoso Downs and Sunland Park in New Mexico. His impressive career has resulted in trophies, statues, and paintings filling every room of his Perkins, Oklahoma home representing the horses he has treated over the years. He was named to Who’s Who in Veterinary Medicine and selected to the Outstanding Young Men of America.

One of ten to fourteen veterinarians at the track, Story spent his career working with owners, jockeys, grooms, trainers and horses helping produce fourteen All American Quarter Horse Futurity winners at Ruidoso Downs, NM. The All American Futurity is the richest quarter horse race in the world.

Along the way, Dr. Story learned from careful observation of his equine clients and developed a successful régime to maintain and keep his equine athletes healthy as well as preparing them for an upcoming race

On one day, Dr. Story would treat 120 horses and the number increased from there. The most number of horses he ever worked on in one day was 342. He started at 1 o’clock in the morning and finished at 11 that night. This is a demonstration of his commitment and passion for the equine industry and to the veterinary profession. Story retired in 2012.

Bob and his family raise top caliber show horses that have won many World and Reserve World Championships and multiple superior awards. At age 11, Bob’s daughter Ryan won showmanship and horsemanship at the Champion of Champions in Ft Worth and saddles at Arizona’s Sun Circuit and Blue Ribbon Circuit. Bob’s son Tyler won Rookie of the year in New Mexico at the age of six.

In August, 2021, Bob came out of retirement to serve as the Horse Racing Integrity and Safety Act Veterinarian for Remington Park and chairs the Remington Park Safety Committee. Story also serves on the Board of Directors of the Oklahoma Quarter Horse Association.