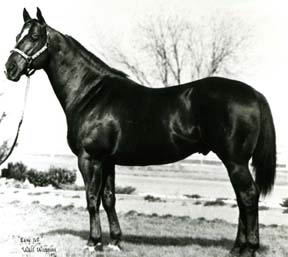 With a big heart and blistering speed, Easy Jet earned a spot among the legendary figures of the Quarter Horse world. The sorrel stallion was born in 1967 and was a product of Walter Merrick’s breeding program.  Easy Jet was sired by the phenomenal Jet Deck and out of the Thoroughbred mare Lena’s Bar (TB) by Three Bars (TB). Once broke to ride, the sorrel was worked against Jet Smooth at 350 yards and won.  Merrick decided to run Easy Jet in a yearling race at Blue Ribbon Downs in Sallisaw, Oklahoma.  The big colt won with daylight between him and the second-place horse. This was the beginning of an illustrious racing career.  The Oklahoma rancher sent Easy Jet to the starting gates 26 times as a 2-year-old.  The sorrel won 22 times, including the All-American, Kansas and Sunland Fall futurities. In 1969, Easy Jet was the racing world champion.  The sorrel returned in 1970, and was the racing champion stallion.

In 1971, Merrick sold half interest in Easy Jet to Joe McDermott.  Over the next several years, Easy Jet was sold several different times.  The Buena Suerte Ranch in Roswell, New Mexico, bought Easy Jet for $3.5 million, and in the early ‘80s the stallion was syndicated for $30,000,000.  Easy Jet’s last owners were Merrick and Mark and Bill Allen. Easy Jet’s first foals hit the ground in 1971, and by 1973, he was on the AQHA leading sires list.  Some of the sorrel’s champion get include Easy Date, Pie In The Sky, My Easy Credit, Easy Angel, Easily Smashed, Extra Easy and Megahertz. Easy Jet was standing at the Lazy E in Guthrie, Oklahoma, in 1992 when it was decided he needed to be euthanized. Easy Jet died in 1992 at 25, and was inducted into the American Quarter Horse Hall of Fame in 1993 and the Oklahoma Quarter Horse Hall of Fame in 2005.