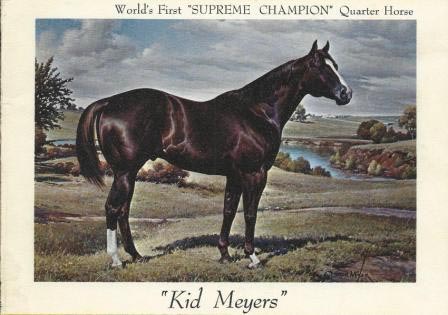 The American Quarter Horse Association’s first Supreme Champion had everything going for him the day he was foaled in 1963.  He was sired by the legendary Three Bars (TB), then the leading sire of racing horses of all time, having sired the winners of $2,850,000 and 185 AAA horses.  His dam Miss Meyers by Leo, was world champion running horse of 1953, and the dam of Oh My Oh and Mr Meyers, both AAA on the track.  If ever a horse was bred to run, it was Kid Meyers

He was foaled at the famous Green Pastures Ranch just west of Purcell, OK home of some of the greatest names in Quarter Horse racing.  He was bred and owned by American Quarter Horse Hall of Fame member A B Green.  On those 600 acres have trod some of the truly immortals of the sprint tracks, including the mighty Top Deck and Go Man Go.

Green, one of the most colorful personalities the Quarter Horse racing world had known at that time, had bred over thirty AAA horses and was considered to be the one of the cleverest breeders of running horses of all time.

Although bred in the purple and foaled in the luxurious foaling barn surrounded by white panel fences in the Kentucky-like setting of Green Pastures ranch, Kid Meyers was dealt nature’s cruelest blow.  His mother died of colic when he was just two weeks old.

Thanks to the efforts of Mrs Green and son Bruce, the tiny foal survived.  Mrs Green brought the foal to town and put him in a small barn behind their house.  She left him alone for a few hours, then took out a small pan of water.  She put it down and stepped back, and he moved up and drank it all.  When she returned about an hour later with an adequate amount of warm milk, he walked right to her.  He was raised in the back yard, in town, for the next six months.  He became quite a pet and developed a personality that made him easy to work with.  He grew into a 15.1 hand, 1280 pound beauty of a chestnut stallion with a marvelous disposition.  His greatest past-times during that time was running along the fence with the dogs or playing with a feed sack.

Then he was a two-year-old, and it was time to fulfil his destiny.  Kid Meyers was shipped to Roderick Kaufman in Del Rio, Texas, and put into race training.  He made his first start on March 21,1965, winning easily under jockey Clifton Detiege, who had piloted winning horses at All American Futurity.  He was then hauled to Ruidoso for several stakes races.  He ran against the best there and at Albuquerque, Sunland Park, Bay Meadows, Sacramento and Los Alamitos. He ran the 400 yards in the Sunland Futurity trials in a blistering 19.93 seconds.  He quickly earned his AAA rating at 350 and 400 yards while earning a then-very respectful $11,155 through his second year at the track.  He won six races, earning 31 racing points.  Before leaving racing, he earned AAA at seven distances.

Because of his flawless pedigree and his display of speed, Green decided to bring Kid home to the breeding barn.  His success at stud was assured.

Then came one of the most important events of Kid Meyers career.  Jerry Wells, a 27-year-old Sulphur, OK, cowboy, had observed the admirable conformation of the speedy chestnut.  Wells had served as apprentice trainer to Matlock Rose and later worked for George Tyler, so he was essentially a cow horse man.  Wells went to Green and asked if he could show the horse at halter.

A B Green, strictly a racing man famous for his staggering wagers during the match-race days, was not immediately enthused with the idea.  But after some deliberation, he decided it might help the horse’s stud career, so he granted Wells his wish, and brought Wells to Purcell to work out of Green’s barn.

Wells took him out on the show circuit and won first place with him the first time shown.   He had four more consecutive wins including two grand championships and one reserve champion.

One day, Wells had an overwhelming urge to ride Kid Meyers to learn if he had any natural reining ability.  His hunch was right, and Wells began to train Kid Meyers for western pleasure in secret.  Wells said he was the best natured horse he ever worked with.  That discipline was also a success on the show circuit.

When Wells heard AQHA’s announcement about the Supreme Champion title, he began to get ideas.  Would Kid Meyers make a roping horse?  In a paddock behind the barn, safe from the watchful eyes of other ranch hands, he began roping on the Kid.

Of course, Green found out.  He told Jerry if he could make Kid Meyers the AQHA’s first Supreme Champion, he would buy him a new Cadillac.  Jerry did, and Green came through.

When A B Green walked across the Stardust Hotel stage in Las Vegas to accept the highest award granted by AQHA before seven hundred applauding members at the 1968 annual convention, it was a tribute to the founders of the world’s largest and fastest growing equine registry.

Kid Meyers exemplified the ideas charter members had conceived twenty eight years before at the organizational meeting in the Blackstone Hotel in Fort Worth, Texas.  Kid Meyers accomplished what many knowledgeable horsemen considered impossible.  He represented the nearest to an ideal horse which 40,000 AQHA members had sought to breed for nearly three decades.

The ideal quarter horse had speed, conformation, disposition, intelligence and the ability to perform, but a horse superior in all these categories is indeed rare.

Kid Meyers then went to stud and his second crop of foals in 1969 showed the promise of this exciting young stallion.

A fatal bout of colic took Kid Meyers prior to the 1972 breeding season but he left a record of 29 winners and three stakes winners.  It is hard to say what he might have achieved as a sire had he not been lost so soon before his time.

His most famous son was Mr Kid Charge, out of Fancy Charge by Go Man Go.  This sorrel two-year-old colt won the 1971 All American Futurity and Rainbow Futurity at Ruidoso Downs.  In the All American Futurity, he set the track’s 400-yard record and earned $200,841.  Mr Kid Charge, SI-104, winner of a total of $299,186,  was subsequently named the American Quarter Horse Association’s Champion Two-Year-Old Colt and was the breed’s leading money earner of 1971.

Tonight, Kid Meyers joins his owner, his dam, his trainer and his dam’s sire in the Oklahoma Quarter Horse Hall of Fame.