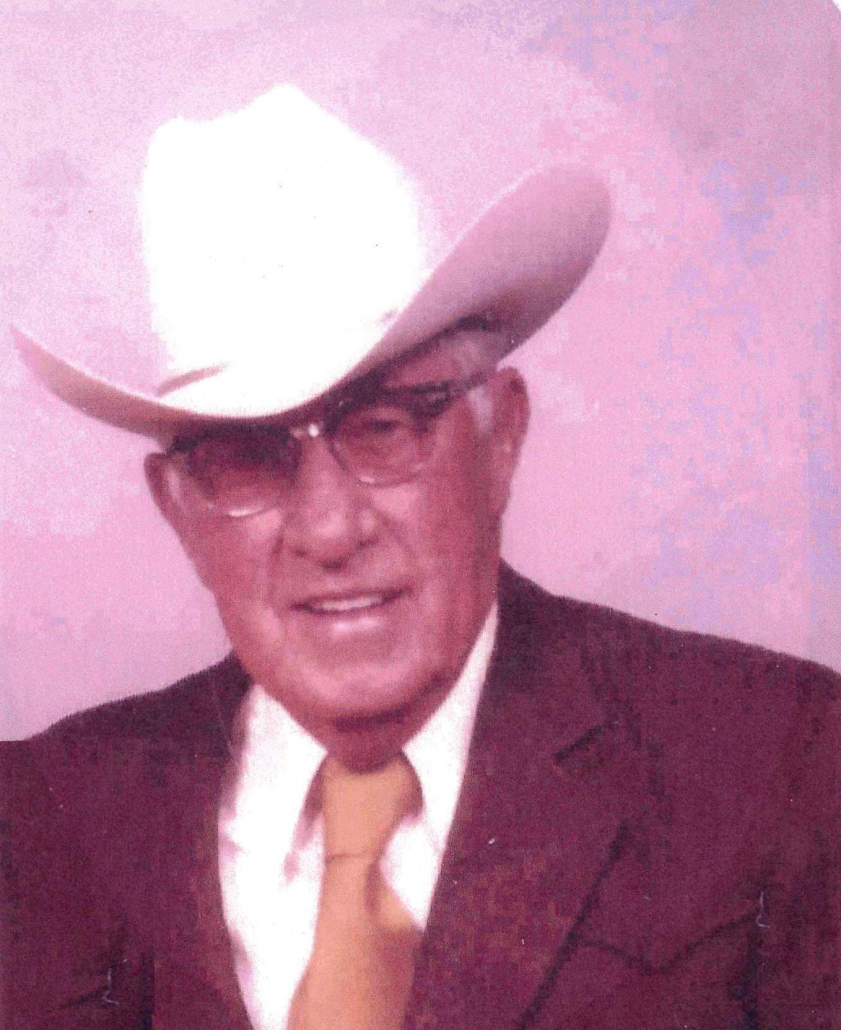 WOODWARD Though ill health may keep Monte Reger from making it to the Woodward Elks Rodeo this week, he hasn’t missed many over the years.

Reger helped organize the first rodeo held at Doby Springs community in the 1930s, and then became a nationally known rodeo announcer and entertainer, along with his children and a trained longhorn steer named Bobcat Twister.

The sign at the gate on U.S. 270 five miles northwest of Woodward says, “Monte and Opal Reger Quarter-horse Ranch Visitors welcome.” The trophy room inside is filled with “Oscars” of the horse world and keepsakes of the Reger’s rodeoing days.

He started as a farm hand on the Crouch Ranch near Buffalo, then married the boss’s daughter and became one of the best-known performers in Oklahoma.

“We worked hard building the chutes and lining up rows of wagons and Model-T Fords to fence the pasture arena for that first Doby Rodeo,” Reger recalled, confessing that he didn’t know how to put on a rodeo back then.

“It was really just a competition between the cowboys and people came to watch,” he said.

The first roping and riding show was a flop.

“We just had $15, $10 and $5 for prize money, but there were still not enough gate receipts to pay off,” he said. “I had to sell all my wheat crop and borrow money to pay it off, but we made it back the next year.”

The young cowboy had caught the bug to rodeo an

d he began announcing at programs between his farming duties.

“The cowboys now are athletes, not ranch hands,” Reger said. “If you turned a rodeo cowboy loose on a ranch, most of them wouldn’t know what to do. Back then, whatever you did best on the ranch, that was what you tried for at the rodeo.”

Reger’s specialty act came from a load of wild longhorn steers crossed with Brahmas from Louisiana and delivered to the Crouch Ranch.

There was one big red steer with extra-long, curvy horns that caught Reger’s eye. Mr. Crouch wanted to dehorn the steer and butcher him, but the son-in-law had other plans.

“He was a mean son-of-a-gun,” Reger said, “so the cowboys tried riding him. Nobody could stay on him, though.

“Five jumps was the longest anyone ever stayed. That was a black cowboy from Cleo Springs.”

Reger decided to tame the old steer and teach him som

The owner said he named the steer Bobcat Twister because his tail was bobbed and he twisted when he bucked, but folks just called him “Bobby” for short.

He put the outlaw steer into a small pen to get him used to the civilized world, then would sit outside the pen and talk to the animal to get him used to his voice. “You have to remember that most of those old steers had never been around people before. If you tried to get near them, they would run at you with those horns,” he said.

Taming this wild longhorn was not an easy assignment.

“He was in a two-horse stall with an opening between, and a small window over the feed trough on each side to put feed in,” Reger recalled.

When the longhorn came through the door after him, Reger would dive out the window.

After about six months, “Bobby” was tam

e enough to let Reger scratch his side. Once the cowboy could get a ring in the steer’s nose, it was time to learn who was leading whom.

In 1931, Monte and Opal Reger decided to put the show on the road.

There wasn’t much money circulating in Oklahoma and the family had grown from two to five people. Their son, Bud, was 6 years old; their daughters, Virginia and Dixie, were 4 and 1.

Reger loaded the children in a motor home he had built on a truck chassis, put the steer in a homemade trailer, and they headed east to seek their fortune.

“We limped back home,” Reger recalled, “but we were a lot wiser.”

They made a few changes and the next year Reger and the steer went on the rodeo circuit alone.

They were a hit in Hollywood where they worked advertising fast-food stands called “Little Pig,” and they were in the movies. Reger became a charter member of the Screen Actors Guild. They were the feature attraction at all t

he major and some of the not-so-major rodeos _ including the “granddaddy rodeo” at Cheyenne. Reger and Bobby even performed for 32 days at Madison Square Garden in New York.

Later Opal and the children joined the troupe and they eventually organized their own “Wild West show.”

“It was an entertaining show with a lot of class,” Reger said.

Reger had taught old Bobby to do a lot of tricks, one of which was to jump over a convertible car in the arena. True or not, people still insist at one Woodward rodeo, the steer landed in the middle of Reger’s brand new, white convertible.

Jim Eskew Jr., the World Champion Trick Roper, had taught all three of the Reger children how to rope and ride, and they became real “crowd-pleasers.”

They could not bear to part with “old Bobby,” so they had his head mounted and hung it in the trophy room.