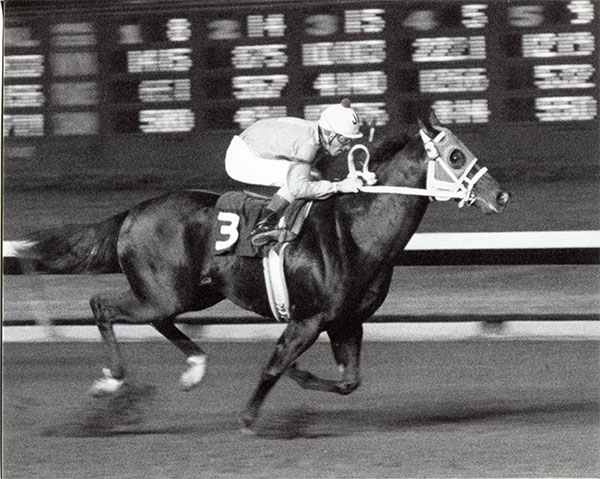 Few horses in history ever accomplished what this Oklahoma-bred American Quarter Horse accomplished in 1982, 1983 and 1984 when he ran 1st, 2nd or 3rd in 24 of his 25 starts while earning $1,793,718 at Ruidoso Downs, Los Alamitos, Turf Paradise and Trinity Meadows.

In the more than 75-year history of the American Quarter Horse Association, only 12 horses have earned more money than this brown colt bred, raised and raced by Marvin Barnes.

Mr Master Bug last raced in 1984.  At the time he retired from racing Mr Master Bug was the breed’s all-time leading money earner.  That is an honor that Mr Master Bug retained until Refrigerator, another Oklahoma horse who was bred just down the road from where Marvin raised Mr Master Bug, became the first American Quarter Horse to earn $2 million.

When Marvin passed away this past November 30 at his home in Ada, he probably knew that the $1.8 million in 1980 dollars earned by Mr Master Bug would be $3.6 million in 2016 dollars.

Mr Master Bug began his official race career in Texas, where he ran third in a futurity trial. In his fifth out he won the $111,000 Kansas Futurity Consolation at Ruidoso over the Champion Call Caleb.

Mr Master Bug was then a promoted second to Champion Yankee Win in the $618,000 Rainbow Futurity.

In 1982, in order to qualify for the Rainbow Futurity or the All American Futurity a horse had to prevail in two trials for each of these big races.

Mr Master Bug won all four of his trials races for those two futurities by margins of ¾, ½, 3-1/4 and 1-3/4 before prevailing in the Labor Day final of the All American Futurity, winning by ½ length over his stablemate Miss Squaw Hand.

This All American Futurity was the first to ever pay $1 million to the winner and with the second place finish by Miss Squaw Hand, Barnes earned $1,369,000 on that day.

He returned to Ruidoso in 1984 and won the $422,862 All American Gold Cup and the $154,010 Rainbow Silver Cup. For his 1984 accomplishments, Mr Master Bug was named the AQHA’s Champion Aged Horse and Champion Aged Stallion.

Somehow, the title of AQHA World Champion eluded Mr Master Bug.  However, the readers of TRACK Magazine named him the TRACK Magazine Horse of the Year.

The All American Gold Cup win in 1984 was the last race for Mr Master Bug.

Some physiological issues kept Mr Master Bug from showing his full potential as a breeding horse, though he did sire nine stakes winners and the earners of almost $1 million in official Quarter Horse races.

When the AQHA holds its annual convention in San Antonio in two months, Marvin will be posthumously inducted into the AQHA Hall of Fame.  One thing for sure, Marvin would have talked about Mr Master Bug and Lady Bug’s Moon, two of the best horses ever in Oklahoma or anywhere else.