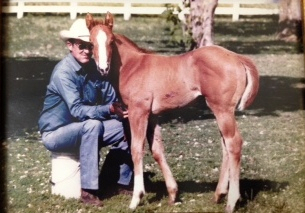 A friend to Orren Mixer, Jim Thorpe and D. Wayne Lukas, Nick McNair has owned horses that changed the face of the Quarter Horse world.

Born in Mayes County near Strang, McNair was always around horses. His father was a horse breeder.

“We always had the best looking horses around,” brother Jake McNair said.

McNair doesn’t see himself fitting that criteria. “I’m just a horse trader, and I’ve been lucky enough to come up with some good ones,” he said. “I wish I knew who put me in for this.”

Unassuming as he is, horses McNair has owned made a lasting mark in the American Quarter Horse Association. Probably first on that list is Impressive. Impressive is one of the most recognizable halter horses in the world, second as a sire of point-earning halter horses only to Two Eyed Jack.

When the colt was born, “I knew he was the best sucker I’d ever seen,” McNair said.

Impressive was born in 1968. McNair sold him when he was a two-year-old.

“I don’t like to keep one long enough to remember his name,” McNair joked. “Horses have been my hobby, but I could never afford a hobby that didn’t break even or make money.”

pressive made his mark as a halter horse, McNair stresses the bloodline “will ride.

“Bill Cornell over at Jay used to ride colts for me,” McNair said, “and in 30 days he’d just have them riding along with their head down.”

Indeed, among Impressive’s progeny are race winners and many performance Register of Merit winners. Up to this day, he is one of the leading all-time sires of both halter and performance horses.

An old cowboy adage says a person is lucky if they own one good horse. Impressive was not McNair’s first or only good horse. With his uncanny eye to spot a special individual, McNair bought Blondy’s Dude at a horse and mule auction in Fort Smith, Ark. The colt was born in 1957, a son of a linebred Zantanon horse, Small Town Dude, who was used in various Joel McCrea westerns. His mother was a racehorse named Blondy Queen.

By the time Blondy’s Dude ran through the Fort Smith sale, he was sickly.

“He was sick; he had the strangles or something,” son Gary McNair said. “I asked Dad why he bought that scrubby colt. He said he thought when he got him straightened up ‘he’ll make a pretty nice horse.’

“We were coming home and we stopped at Lake Tenkiller to take a swim. That was all open range then. No fences. We tied him to the trailer and when we got back, he wasn’t there.” A lengthy search found the colt in the timber lined country side.

man bought Blondy’s Dude from McNair and he and son Jerald went on to earn 18 Grand Champion and two Reserve Champion awards in two years. The horse was an outstanding reiner and cutter, but was correct enough to stand in a halter class. In fact, he earned more than $21,000 in National Cutting Horse Association competition. He was the grandsire of AQHA Superhorse Diamonds Sparkle.

“He was a great breeder,” McNair said. Oklahoma Star Jr. was elatively small and nondescript, McNair said his progeny were some of the most capable horses he ever saw. He was the sire of race winners and a World Champion barrel horse ridden by Jane Mayo.

Baby Doll’s mother was a daughter of Bert.

When an Oktaha rancher named Brownie Bostic sold out, McNair bought his horses, including Baby Doll’s mother and full sister.

From steer wrestling to racing, McNair partnered in many endeavors.

“A lot of those California boys sold out and came here because there was a five percent sales tax on horses,” McNair said.

“The last horse I bought out there was with Wayne Lukas. He was by Truly Truckles and a mare that produced two stakes winners. Wayne thought he just had to have him, but he didn’t have any money. He was struggling then.”

In fact, when McNair met D. Wayne Lukas he was a school teacher and basketball coach in Wisconsin.

Not too long ago, a friend convinced McNair to go to the ranch rodeo in Abilene, Texas. That event included a ranch horse show and sale. At the sale, McNair began looking through the prospects when he came upon a son of CD Olena, NCHA Horse of the Year, Open Futurity and Derby Champion. The four-year-old worked well on cattle and “he rolled the hair up on the back of my neck.” The horse topped the sale, and McNair bought him. But he doesn’t have him anymore.