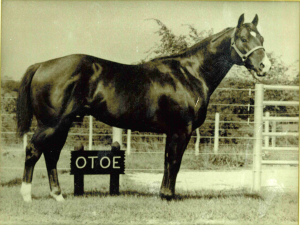 Born in 1960, Otoe was bred to be a racehorse. He was, by Sugar Bars out of Juleo by Leo and was bred by Bud Warren of Perry, Oklahoma.  Warren had created a speed dynasty in the late 1940s and early 1950s with Leo and Sugar Bars.

Juleo, a 1952 bay mare out of Julie W by Joe Hancock was a Register of Merit racehorse and a full sister to the renowned producer Flit, dam of King’s Pistol, Leo Bar, Flit Bar, Bar Flit and Sugar Leo.

When legendary trainer Jerry Wells was a junior in high school, he began working for Dr Jack Donald of Sulphur OK, helping him with his horses.  Donald had been hauling mares up to Bud Warren’s to breed to Leo and Sugar Bars.  Wells went along and saw the striking young Otoe when he was three months old.

As the story goes, Jerry recommended Jack buy the colt that day. Jack paid a staggering $20,000 for Otoe and everyone was talking about the doctor in Sulphur who gave so much money for a baby colt.

Otoe changed hands for the first and last time in his life at the tender age of five months when they picked up the colt.

As a late yearling, Otoe was shown twice at halter with less than favorable results.  It was determined that Otoe’s career needed a drastic change.  So he was put into race training the following spring. It was Wells responsibility to break and ride Otoe and getting him ready for the race track.

Under Wilbur Stuchal’s of Augusta, KS tutelage, Otoe went to the post 13 times as a two year old and recorded five firsts, two seconds and three thirds.  He qualified for his race Register of Merit and achieved an AAA rating (later changed to a 95 speed index).

In the fall of 1962, Otoe was taken out of race training and turned over to Wells to resume his show ring career.  The results this time around were much more gratifying.

Dr. Donald wanted him to become a champion halter horse.  By year’s end, Otoe fulfilled that and had qualified for his AQHA Championship award.  In doing so, he became the breed’s youngest AAA AQHA Champion.

He wrapped up his halter career with 23 wins, 15 grands and 3 reserves in 25 shows.  He earned 76 points and a Superior halter award.

Otoe was retired to the breeding shed in 1963 and outside mares came rolling in.

Several years after Otoe had retired from the show arena, the King Ranch sent a man up to look at him.  They were interested in breeding some of their Thoroughbred and Quarter Horse mares to him.  They began hauling mares up the following spring and they continued doing it for the rest of Otoe’s life.  They brought daughters of horses like Assault (TB) Depth Charge (TB), Hired Hand and Hired Hand’s Cardinal.

In 1970, Otoe suffered an extreme physical setback because he foundered.  Although his health took a positive turn for a short while, in early 1971, at the age of 11, he colicked during the night and tragically died.

As a halter horse and a sire, Otoe spanned the gap between the bulldog horses of the 1940s and 1950s and the stretchier more streamlined horse of the 1970s and the 1980s.  Otoe was a big pretty horse, almost perfect in his conformation.  Because of his influence, halter horses were taller and more elegant.