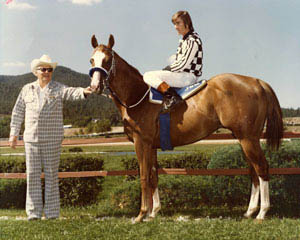 Mr. Shebester was known as the major promoter and benefactor of pari-mutuel horse racing in Oklahoma. Owner of the Blue Ribbon Downs in Sallisaw, he has long been recognized for his contribution to the Oklahoma horse industry. He was also noted as a self-made independent oilman and a generous friend. His latest contribution to the community was the land to build the Wynnewood Shebester Sports Complex. Ralph had to great passion in life the oil business he sold in 1990 and horse racing.

Ralph was a well-loved prominent member of Garvin County and has lived in Wynnewood for the last 20 years. Most people remember him as being a generous contributor to civic affairs and support of youth activities. He has been called Mr. Enthusiastic.

He lost his first wife but remarried on October 20, 1977 to Pauline Hicks Shebester.

Shebester and passed away on August 22, 1997 at his home in Hennepin after a short illness. He was 84.

Ralph Shebester was inducted into the Oklahoma Quarter Horse Hall of Fame in 2011.