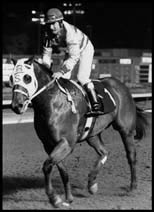 “All horses that are bred to run don’t run.  But those that run are bred to run,” said Sonny Vaughn of Refrigerator. Bred by Vaughn, Refrigerator was out of Native Parr and by Rare Jet, a full brother to racing champion Jet View, and out of Native Parr by Heisanative (TB). Refrigerator rose from humble beginnings and dominated the first half of the 1990s, becoming the richest racehorse in history.  From 1990 to 1995, the bay gelding won 22 of 36 races, including nine Grade 1 races, and earned a record $2,126,309.  He captured the Champion of Champions (G1) in 1992, 1993 and 1994, becoming the first horse to win three runnings of that race.  Refrigerator was voted the racing world champion in 1992-93 and received eight other divisional titles. Refrigerator surpassed Eastex as the sport’s richest horse when he won the 1993 Champion of Champions.  He became the first sprinter to exceed $2 million in earnings when he finished second in the 1994 Los Alamitos Invitational Championship. Refrigerator was retired after running the Champion of Champions in December 1995.  He spent most of his time at the home of owner Jim Helzer, where he loved to race around the trees in his paddock.  He made two appearances at the State Fair of Texas and led the post parades of the 1996 Champion of Champions at Los Alamitos and the 1997 Refrigerator Handicap and 1998 MBNA America® Challenge Championship, both at Lone Star Park at Grand Prairie, Texas. The Helzers believed Refrigerator would make a great candidate to become an AQHA Supreme Champion.  He entered into training in February 1999 as an 11-year-old gelding.  He was in rope horse training when he was involved in an accident and sustained a severe head injury.  A few days later, Refrigerator was euthanized and buried at the Helzers’ JEH Stallion Station in Pilot Point, Texas. The Helzers set up a program through the American Quarter Horse Foundation to raise funds to further the research on equine trauma, increasing awareness, information and technology for veterinarians and horse owners. Refrigerator was inducted into the American Quarter Horse Hall of Fame in 2000 and the Oklahoma Quarter Horse Hall of Fame in 2008.