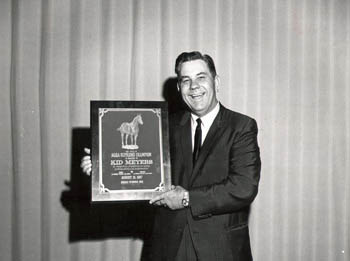 From his Green Pastures Ranching in Purcell, Oklahoma, oilman A.B. Green raised and raced some of the most famous horses of their day, with four of his horses honored with induction into the American Quarter Horse Hall of Fame: Miss Meyers, Barbara L, Go Man Go, and Miss Olene.

In 1953, A.B. bought Miss Meyers for $6,000, a tidy sum for a mare in those days. She went on to set track records at four different tracks, was the highest-money earning horse of 1953 and was world champion and champion mare.

Kid Meyers, a son of Miss Meyers and Three Bars (TB), was a steady racer with earnings of more than $10,000. When he returned home from the track, A.B. asked trainer Jerry Wells to assess Kid Meyers as a halter prospect, and they decided to point the colt toward AQHA’s new Supreme Champion award and earned the title.

In the breeding barn, Kid Meyers sired Mr Kid Charge, the winner of the 1971 All American Futurity.