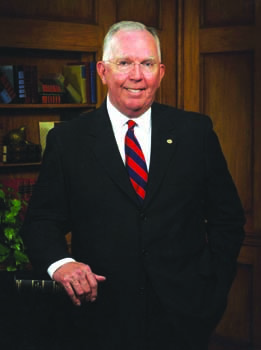 When Bill Brewer was growing up in southwestern Oklahoma, he dreamed of being a cowboy. He never dreamed he’d work his way up the ranks to become the wagon boss and a strong, confident presence at AQHA, the world’s largest equine registry.

After graduating with an animal science degree from Oklahoma State University in 1967, Brewer went to work as a field representative for the American Polled Hereford Association.

It was after the third offer by Ronnie Blackwell, who was assistant to the AQHA executive secretary, Brewer agreed to an interview at AQHA. Brewer in 1971 drove to Amarillo for the interview with Blackwell and then-Executive Secretary Don Jones, and accepted the job as an advertising representative for The Quarter Horse Journal.

Brewer, the AQHA Executive Committee and the staff expanded AQHA’s business model from being primarily a breed registry to include a long-term initiative to offer more opportunities for people to enjoy their horses through membership-based programs.

Prior to and after retirement, Brewer’s activities in the equine industry included working with the American Horse Council, the Tri-State Fair in Amarillo, the United States Equestrian Federation, the United States Equestrian Team Foundation, FEI and the American Association of Equine Practitioners. He has also been recognized as a graduate of distinction from Oklahoma State University, and received leadership awards from Texas 4-H and the National Western Stock Show. In 2007, he was inducted into the Tri-State Western Heritage Hall of Fame and the Oklahoma Quarter Horse Association Hall of Fame in 2008.