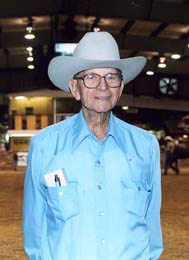 With the dream of owning land for match races, Bill Hedge created Blue Ribbon Downs, which became the first pari-mutuel racetrack in Oklahoma.

After graduating from high school in 1936, he broke broncs and started colts for horsemen Bert Benear and Ronald Mason, owner of Oklahoma Star and Beggar Boy. In 1937, Hedge joined the Cowboy Turtles Association, forerunner of the Professional Rodeo Cowboys Association.

Hedge married Helen Bernice McEntire in January 1939. Hedge worked in a stockyard and as a salesman, and he owned a dairy and a café. In 1957, he became manager of Rowland Stanfield’s Quarter Horse operation, which under his direction became successful with racing and show horses. The following year, Hedge and his wife purchased 102 acres west of Sallisaw, Oklahoma, which he named Blue Ribbon Ranch, later to become Blue Ribbon Downs.

After selling Blue Ribbon Downs in 1973, Hedge continued to stay involved in the track as an owner and trainer. His record as a trainer included sending out 78 winners from 510 starts, with horses he saddled earning $510,622.

He conditioned three winners of four stakes, including Oklahoma Futurity winner Taking On The Bully and Oklahoma Derby winner Willwintoo. Hedge sent out his homebred A Dash Of Native to win the 2002 Blue Ribbon Futurity. This was the only time he won the marquee event.

Hedge died in July 2002, eight hours after A Dash Of Native won an allowance race at Fair Meadows in Tulsa, Oklahoma.

Bugs Alive In 75
Scroll to top