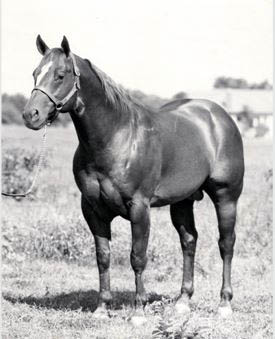 Blondy’s Dude, a 1957 Stallion by Small Town Dude, out of Blondy Queen, was owned and shown by Morgan Freeman of Skiatook, Oklahoma.  He created quite a record both in the show arena and as a sire.

Noteworthy among the accomplishments of this outstanding stallion was standing Grand Champion at the 1962 Ft. Worth Fat Stock Show – the largest Quarter Horse show in the world up to that point.  He went on to be named Grand Champion 19 times and Reserve Champion 2 times in the 24 shows where he won his class.

The sire of 25 AQHA Champions, and many top producing mares, he was the 1968-69 AQHA Leading sire of halter point earners. A son – Mr Diamond Dude – sired the Super Horse Diamond Sparkle, and a daughter produced the Super Horse Reprise Bar.

Blondy’s Dude earned the title of AQHA Champion in 1963 and was inducted into the AQHA Hall of Fame in 2001.