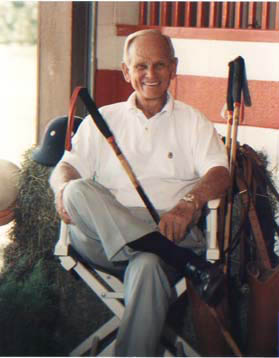 Robert W “Bob” Moore was a leader in American Quarter Horse racing, on the polo field and in the automotive industry. In 1955, Moore opened his first auto dealership in Wichita, Kansas.  During the next 40 years, he built more than 30 dealerships that included more than 20 domestic and foreign franchises.  He received the Cadillac Master Dealer award 27 times for his Oklahoma City Cadillac franchise, and he was one of only three dealers to be Master Dealer 25 consecutive years. Moore wan an enthusiastic polo player and avid student of bloodlines.  He began breeding American Quarter Horses in the 1960s.  With a small band of broodmares from racing champion Vanetta Dee and the blue-hen mare Dyna Van to homebreds Perfect Arrangement and Awesome Blossom, and through his association with the great sires Three Chicks, Coup De Kas (TB), racing champion Rare Form and his homebred racing world champion Mr Jet Moore, Moore exerted enormous influence in the Quarter Horse racing world. A 30-year breeder, Moore bred 346 winners from 473 starters, earning more than $9.1 million.  Included among his 38 homebred stakes winners are champion Dashing Perfection and his beloved multiple-track-record-holder Prissy Gold Digger, the dam of two stakes winners.   Moore, along with several partners, purchased Haymaker Sales from Chet and Dale Robertson in 1978.  They turned it into Heritage Place Sales Company in Oklahoma City.  He also was actively involved with the push to legalize pari-mutuel racing in Oklahoma.  Moore built the Broad Acres Polo Club adjacent to his showplace Bob Moore Farms in Norman, Oklahoma, and passed his love of the game to his sons, Ted and Mark. Moore died in November 1998, and was inducted into the American Quarter Horse Hall of Fame in 2003 and the Oklahoma Quarter Horse Hall of Fame in 2005.