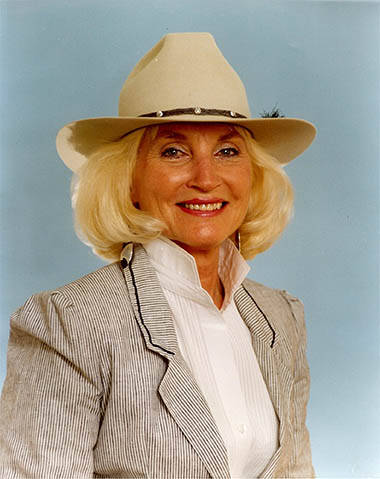 The youngest of three daughters born to Robert Clyde and Velma Hammett, Bobbie was raised on a farm near Gracemont, Oklahoma.

At the age of 12, along with her mother and sisters, she moved to Anadarko. Upon graduation from High School in Anadarko, Bobbie moved to Oklahoma City to persue a degree in business. Soon after, she was offered the opportunity to assist in the offices of the President Pro Tempore of the Oklahoma State Senate. In 1965, Bobbie was promoted to the position of State Senate Calender Clerk.

In 1968 the Oklahoma City Chamber of Commerce invited Bobbie to work part-time assisting with the National Finals Rodeo. She handled all of the ticket sales and soon, the event was a sell-out. In addition, Bobbie was instrumental in bringing the Miss Rodeo America contest from Las Vegas to Oklahoma City so that it could be integrated as part of the NFR.

When the AQHA World Championships moved to Oklahoma City in 1975, she lead the daunting task of raising the funds necessary to host the show. Very notably, she developed the popular AQHA Golf Tournament, Steak Cookout and VIP Sponsors’ Reception.

After working for the State Senate for 25 years, Bobbie retired and moved on to work for the Chamber full-time as the Director of Metropolitan and Agricultural Events. She considered this offer a privilege because it gave her the opportunity to work with the exceptional individuals involved in the Equine and Agricultural Industries.

In 1985, she was instrumental in starting the World Championship Barrel Racing Futurity and managed that event for 15 years. In addition, she worked with Stanley Draper, Jr. and Steve Collier to acquire the National Reining Horse Futurity and Derby. Bobbie worked tirelessly to pass the MAPS “Bed Tax” which financed improvements to the State Fair Park. Due to these improvements, the AQHA, OQHA and many other organizations enjoy the finest Equine show facility in the nation when they compete in Oklahoma City.

Bobbie retired from the Chamber after 37 years. She now is able to focus full-time on her own equine operation at Spear B farm in Yukon.

She runs a Thoroughbred breeding operation and races her horses at Remington Park, among others. Her success has included the Oklahoma Classic’s Champion race horse for two years in a row, in addition to a Horse of the Year.

She has passed her love of horses on to her daughters Rhonda, Robbie and Renee.

The love of the equine industry and the ranch tradition have made Bobbie Steenbergen an immeasurable asset and true friend to tOQHA. It is for these reasons that Bobbie is truly deserving of The Bud Breeding Oklahoma Spirit Award.