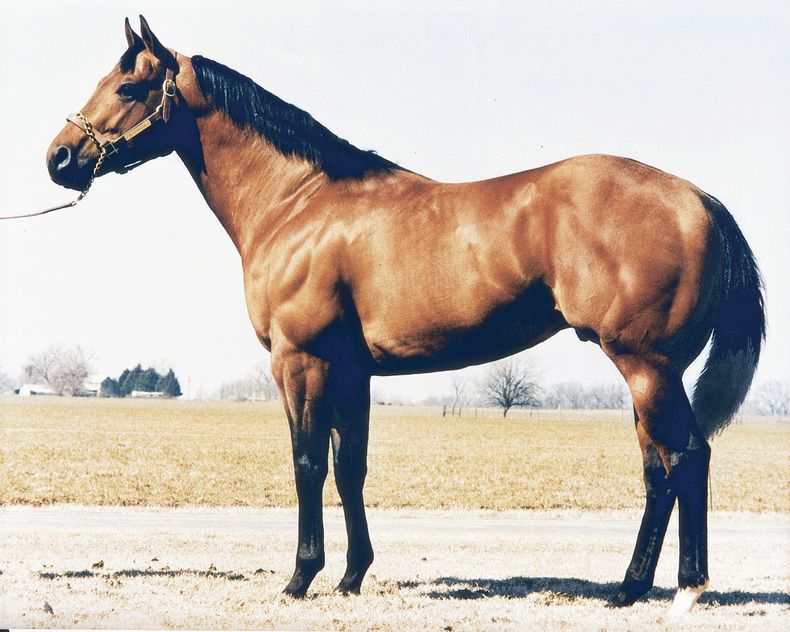 Bred and raised by Jean and Andy Chavers of Fort Lupton, CO and raced his entire life by Jean Chavers, Bully Bullion was a member of the first crop of foals sired by 1981 World Champion Special Effort, the only horse to ever win the two-year-old Triple Crown at Ruidoso Downs.

The wins in the All American Gold Cup (G1) and the Mr Jet Moore Stakes in 1988 led to Bully Bullion being named the American Quarter Horse Association’s Champion Aged Stallion of 1988.  In 28 lifetime starts, Bully Bullion had 10 wins, 8 seconds and 4 thirds.  Only four times did he fail to run 1st, 2nd or 3rd and 3 of those 4 times were in Graded Stakes.

But it is as a sire that Bully Bullion will best be remembered.  Standing his entire career in Oklahoma with Dee and Betty Raper at their Belle Mere Farms, Bully Bullion sired the earners of nearly $9 million in American Quarter Horse races and with his earnings in Paint and Appaloosa racing and barrel racing his gross earnings easily tops $10 million.  Bully Bullion is the No. 2 all-time siring son of Special Effort.

Some of the most highly-sought mares today are daughters of Bully Bullion.  They have produced such major stakes winners as Bullys Runaway; DMNV Mountable; Rarest Daisy; Shawshank; Finche; All American Derby G1 winner and Ruidoso 440-yard track record setter Snow Big Deal; SF Royal Bank; Eye Yin You and many other big runners.

Throughout his life he was noted as being a sire of individuals with good minds and a lot of try, and many of his offspring went on after their race careers to be useful in almost every performance discipline.   Dee and Betty often have shared that Bully “had one of the most unique personalities they ever saw; he was almost Human and he passed that on to many of his foals.  It wasn’t unusual for the farm to receive letters to Bully asking about his new foals, or to have visitors stop by on their way through town just to see him.  Bully Bullion touched many lives.

With his daughters already producing the winners of 71 stakes races and the earners of more than $12.1 million, the influence of Champion and Leading Sire, Bully Bullion will be felt in American Quarter Horse racing for many, many years.