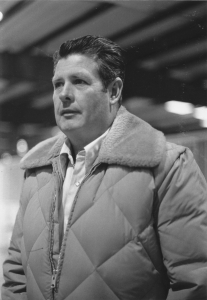 Charlie Claborn was born April 17, 1932, near Minco, OK.  He was a hardworking guy who never strayed very far away from Oklahoma City. In 1951, a year after he graduated from Capitol Hill High School, he married his high school sweetheart Vera Marie Bell.  After serving three years in the United States Coast Guard, Charlie was back in Oklahoma City working for Rainbow Baking Company, a job he held for more than 30 years.

In 1979, Charlie and Vera Marie began a parallel career by establishing Claborn Farms in Mustang, Oklahoma, just west of Oklahoma City. A student of horse pedigrees, Charlie purchased a 1969 son of Go Man Go named Kitaman.  The sorrel stallion was out of a daughter of the great Three Bars and his second dam was a daughter of Leo.  The man who bred Kitaman was Lester Urschel, the father of leading breeder Danny Urschel.

Under Charlie’s program of giving everyone an opportunity to raise a race horse, he would keep the fees at Claborn Farms reasonable and do most of the work himself. In 1985 at Claborn Farms you could breed to Kitaman for $1,000, to Mr Easy Charger for $750, or to the Thoroughbred Count Giacomo for $450.  But if you paid in advance, Charlie would give you a 10% discount.

Kitaman sired such horses as Bluestem Down Futurity winner Kita Blue and Yogi Barre, who won stakes at Los Alamitos, Ruidoso, Boise, and Albuquerque.  Before it was all over, Kitaman had 1,846 registered American Quarter Horse foals with nearly 1,300 of them starting in races and 32 of them being stakes winners.  The man from the little farm just west of Oklahoma City had stood a son of Go Man Go that turned out to be the sire of earners of more than $4.3 million.  Few, if any, sons of Go Man Go did more.

Charlie purchased Mr Easy Charger, a stallion that had earned only $273 racing.  In 1982, at the Heritage Place Yearling Sale a couple of guys bought a filly from Charlie for $1,300 only to realize they had bought the wrong horse.  Charlie quickly let them trade in their $1,300 and add $1,500 to it for a gelding.  That gelding named Ima Mr Easy Charger went on to earn $311,439 with his biggest win coming in at the 1985 Heritage Place Futurity when he outran Six Fortunes, a colt that had set a Blue Ribbon track record in the trials for this $557,691 race.  Telling the story of Mr Easy Charger was one of Charlie’s favorite things to do.  Of course, some of Mr Easy Charger’s better runners were out of Kitaman mares.

A couple of years ago, when asked about Charlie Claborn, AQHA Executive Committee member Butch Wise said, “To me, Charlie Claborn and people like him were the backbone of the American Quarter Horse racing industry in the 1970s and 1980s.  People who always loved their horses and took good care of them.  Who used the money they earned making a living to breed and raise and race their Quarter Horses.  Charlie evolved from being a backyard breeder to being a leading breeder.  He wanted everyone to have a horse and to have success in this business.”

Charlie passed away in 2002 after a battle with cancer.