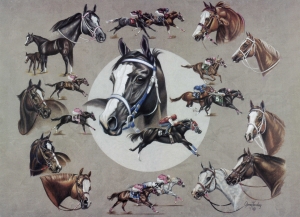 Country Zevi was a 1988 blue roan mare by Zevi out of That Country Charm, by Rocket Ridge. Purchased as a weanling by Sparky Mullins of Wagoner, OK, and his uncle, she earned $ 23,289 in her three-year racing career. She qualified for and competed in many big races, but Country Zevi found her true stride as a broodmare.

The dam of ten foals, all by different stallions, she carried all of them. All ten foals were Register of Merit. Nine were AAA and five of them were AAAT. Two of the ten were champions. Country Quick Dash SI 96 by Royal Quick Dash was four time American Paint Horse Association World champion and he was a seven time APHA World champion sire. Country Chicks Man SI 110 by Chicks Beduino was an American Quarter Horse Association champion aged stallion.

Country Zevi was the first mare in AQHA history to have three Graded Stakes winners in the same year (2007).  All foals were born in consecutive years: Country Chicks Man, Eyesa Country Miss, and SM Country Cowboy. Her progeny earned $1,312,000. That doesn’t include the over $100,000 they won in APHA races.

Sparky saved his money for three years to be able to afford the breeding for Chicks Beduino. This investment brought Country Chicks Man to the racing world. Country Zevi’s most notable offspring, Country Chicks Man earned $736,793 and lit the board 24 of his 38 outs.

Country Zevi’s offspring can still be found racing at the racetrack.  She was an incredible broodmare, and a great contributor to American Quarter Horse racing.