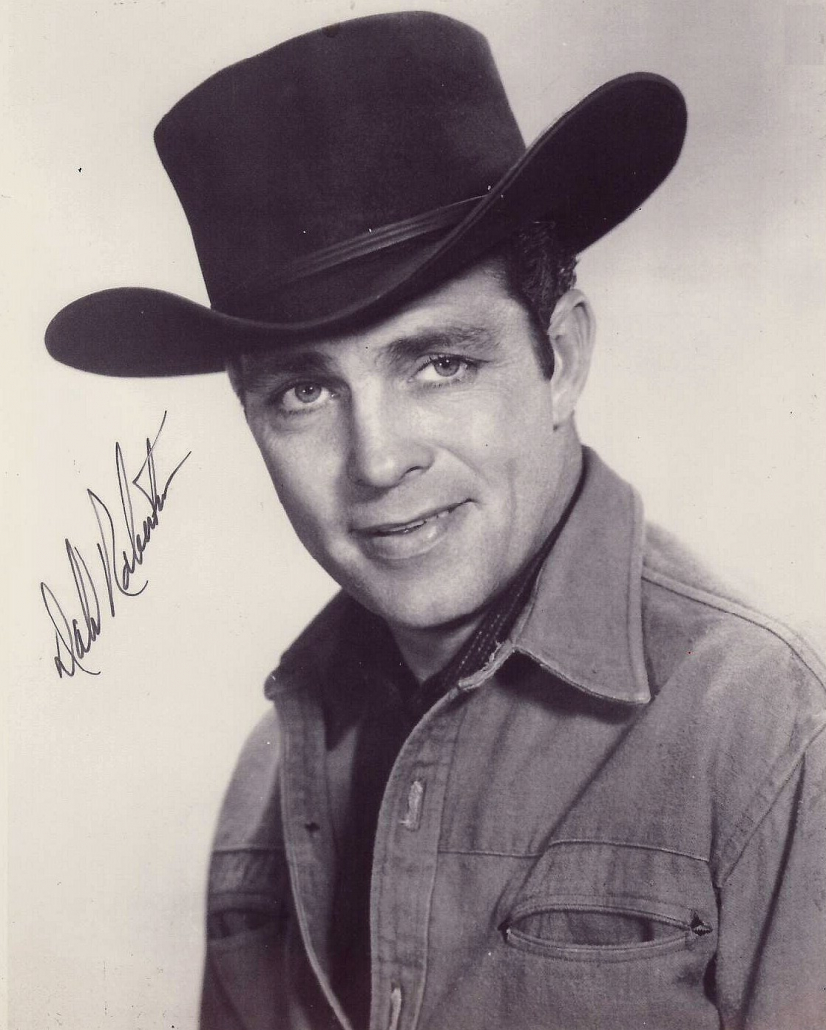 Dale Robertson parlayed his Oklahoma drawl and a way with horses into a long career as a popular, strong-minded star of westerns on television and in the movies

Dale L. Robertson was born on July 14, 1923 in Harrah, OK to Varval and Melvin Robertson. Attended Classen High School in OKC. As he started his junior year, he was declared ineligible to participate in any sports because he had fought in two professional boxing fights. Because of this, he decided to go to the Oklahoma Military Academy in Claremore OK, where he could still participate in sports. There he was nominated “All Around Athlete”

When he was in the middle of his first year of college the Japanese bombed Pearl Harbor (WWII). He along with several other students, volunteered and began his military service at Fort Sill, OK. Then was sent to the horse cavalry at Fort Riley, KS. From there, to Fort Knox, KY to officer candidate school where he was commissioned a Second Lt. in the armored forces, but, was later sent to the Engineer school at Fort Belvoir VA. He was wounded in Germany near the end of the war while serving with the 322 combat Engineer Battalion. Awarded the Bronze Star and one of those whom we refer to as “The Greatest Generation”.

He was discovered by Fox Studios from a photograph he had made for his mother in North Hollywood that had been displayed in the window of that studio. He was signed a multi-film contract. He was a true cowboy and did mostly westerns with exceptions like Son of Sinbad with Vincent Price, Fast and Sexy with Gina Lolabrigida and Take Care of my Little Girl with Jeannie Crain, Call me Mister with Betty Grable and many more.

He was most well-known for his long running series Tales of Wells Fargo. He went on to make The Iron Horse, host of Death Valley Days costarred in Dynasty and Dallas. Again in his own series JJ Starbuck.

He was beloved by the public and his friends for his down home values and what he represented as a man. Dale treasured his family and placed deep emphasis on the value of his friends. “The love of Life” was his motivating factor.

In 1947, He purchased 436.8 acres in Oklahoma’s rolling Canadian River Basin and began building his dream, The Haymaker Farm. He had been in the horse business practically all of his life, but with Thoroughbreds. He wanted to enter the horse racing business in a big way, but the question was whether he should stay exclusively with Thoroughbreds or also breed Quarter Horses.

Later that year, a celebrated horse race at Hollywood Park, CA, provided his answer. He was there and saw Barbara B, a little bay Quarter Horse mare, outrun Fair Truckle, a big strapping brown Thoroughbred colt.

Fair Truckle was bred in Ireland and many horsemen considered him the fastest Thoroughbred ever imported to America. Barbara B was known within the rapidly growing Quarter Horse fraternity, but she wasn’t considered the greatest mare of the time. There were much faster horses around. Still she outran him.

Fans loved the race and Dale envisioned a future for the Quarter Horse racing business not unlike a comparison of Barbara B to track star Jesse Owens and Fair Truckle to mile – runner Glenn Cunningham. If you ask people to identify Glen Cunningham, maybe one out of 10 would know about him. Ask them about Jesse Owens and everyone knows him, even small children who were not alive when he was winning Olympic Gold Medals. Cunningham was a champion mile runner. Owens was a sprinter. Owen’s 100 yards were short, but they were 100 exciting yards. We remember the sprinters. Based on this analogy, Dale thought there would be a future for these “short horses”. That is when he set his goal to breed the best there ever was.

The Haymaker legacy began in the late 1940’s. Along the way, they bred world champions, stakes winners, record setters, and outstanding breeding stock.  For 17 years the Haymaker Farm was absent from the horse racing business and just bred their stock for the marketplace which was the Haymaker Sale. After the death of Dale’s brother Chet Robertson, the Haymaker Sale was sold and became known as the Heritage Place.

Dale owned a horse named Jubilee who was living proof that a racehorse can perform more than one job. He made more than 200 motion pictures, which is the most exacting work a horse can be made to do. He was hauled more than 200,000 miles, appeared in countless rodeos and fairs, and carried hundreds of children on his back. There was no job he could not do.

Later in the 1980‘s the Haymaker also started breeding Paint Horses. Dale at the time envisioned a great future for the breed. He considered, as they should be, works of art, because there are no two alike.  The last paint horse he bred, “Painted Bullet” is still living at the age of twenty- Nine, owned by his brother and sister in law in Rancho Santa Fe, CA.

What a life, Dale Robertson had. He often remarked that he felt he had lived more than one life time.

He passed away Feb. 26, 2013 from complications of lung cancer and pneumonia.

He was adored by his family. He is survived by his loving wife Susan, his daughter Rochelle Robertson and granddaughter, Jade Fusco.