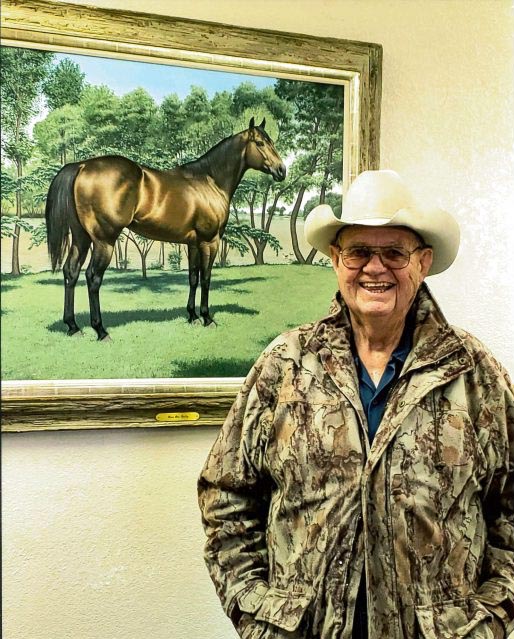 Dwight Van Dorn was born in Woodward, OK on July 10, 1934 to Beulah (Parsons) and John Van Dorn of Harper County, Oklahoma.  Dwight grew up on, and still maintains the 1898 Van Dorn Family homestead.  It was named a Centennial Farm by the State of Oklahoma.

On June 6, 1953, Dwight Van Dorn married Kaye F Pappe in Woodward. In 1956, they started the Top Hat Drive-In with Kaye’s father, Charles Pappe, which later became the Sonic Drive-In.  They moved to Edmond in 1968 and continued in the Sonic Drive-In business.

Dwight and his wife Kaye began their Quarter Horse business in 1967 with the purchase of a cutting horse, Ron Bar Bailey. They bought a forty-eight acre “farm” in Edmond in 1969 and named it Van Valley Farms.

Dwight and Kaye’s children, Mark, Martin, and Keri, all worked and showed horses for Van Valley Farms and were active in the Oklahoma Quarter Horse Youth Association.

Later in their lives, Kaye was diagnosed with Alzheimer’s disease.  It consumed Dwight, as he chose to be her primary caretaker until the very end.  Kaye passed away January of 1997 at the age of 62 after a valiant 9-year battle with the disease.

Although their horse program has diminished in the recent past, the Van Dorns raised 2 or 3 horses that are an integral part of the cattle operation that dominates Van Valley Farms.