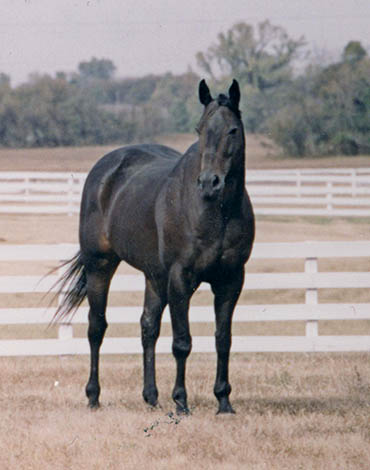 The story of Eastex began with breeders Dr. and Mrs. H. D. Hall of Ada, Oklahoma. Dr. Hall was searching for a breeding “magic cross” when he bred the Thoroughbred stallion Texas Dancer with the Easy Jet mare Tall Cotton. The result was Eastex, a brown colt foaled in 1982. And it was magic.

Eastex won his first race by a length in a 250-yard maiden at Manor Downs in 1984, and that was the beginning of one of the most stellar seasons of any two-year-old Quarter Horse in history. Trained by James McArthur, Eastex won the All American Futurity-G1, Dash For Cash Futurity-G1, Bay Meadows Futurity-G1 (where he set a New Track Record and a career-high 106 speed index), and 10 other races. He finished third in the Grade 1 Kindergarten and Golden State Futurities. He was the AQHA High-Money Earning Horse that year, earned AQHA Supreme Race Horse Honors, and was named the 1982 Champion 2 Year Old and Champion 2-Year-Old Gelding.

At 3 in 1985, Eastex began the year winning the Golden State Derby-G1. He then finished second in the El Primero Del Ano Derby-G1. While in transit from California to Ruidoso Downs for the trials to the Ruidoso Derby, he suffered an injury to a hind leg during a layover in Arizona. His leg became trapped between stall slats. Eastex lay quietly while power saws released him. The damage was at first thought to be minor, and he continued on to New Mexico. Eastex did not run in the Ruidoso Derby trials, but he did finish third in the trials to the All American Derby. He qualified and ran sixth in the finals, ending the year with 3 wins, a seventh in the Champion of Champions-G1, and another $268,558 in earnings.

Eastex never returned to his former brilliance following the stall incident, and he never made it to the winner’s circle again. He carried the scars from the accident for the remainder of his life. He made 8 starts at 4 years of age, finishing third in the Vessels Maturity-G1. He was also a finalist in the Los Alamitos Invitational Championship-G1, World’s Championship Classic-G1, All American Gold Cup-G1, and Horsemen’s QHRA Championship-G1. He ended the year with another $27,226.

In 1993 at the age of 11, Eastex was sold by his breeder/owner for $4,000 to interests in Mexico. Eastex fell off the radar, but later that year he was spotted by horseman Kenneth Winters at a barn near El Paso, Texas. Wearing racing plates. The purchaser planned to run him in match races despite his age. Winters contacted Andy Golden of Speedhorse, who couldn’t imagine such a fate for Eastex, and Golden negotiated his purchase for $10,000. The gelding was returned to Oklahoma.

Eastex remained alert and in good health. Once, two of the neighbor’s weanlings escaped and got into his pasture. Eastex stood guard, flanked by the two weanlings one on each side, until they were returned to their home. On another occasion, Eastex developed a bellyache and most of the veterinarians were at a convention. Richard Joneson came from about 45 minutes away to help try to catch Eastex, who was running with his mare. By the time the gelding was caught, his bellyache was gone. Joneson jumped onto Eastex bareback and rode him back to the barn. Joneson was the last “jockey” to ride Eastex.

Eastex lived there until the property was sold, but Speedhorse continued to provide for his room and board when he was moved across the street to Belle Mere Farm where he was looked after by Dee and Betty Raper.

Eastex continued to make “celebrity” appearances across the country, attending special events and track openings and leading the post parade for the Eastex Handicap at Remington Park.

Eastex eventually developed cataracts in one eye, and then he injured it in 2002 and never regained his sight in that eye. He was always high-spirited and was described as having a “Type A” personality. He could be a little hard to handle at times, but he had a sweetness about him that he demonstrated to those who cared for him. In spite of being up in years, he loved to run and buck at dinnertime and enjoyed his retirement days grazing on green pasture.

Eastex was allowed to live out his life in dignity. At 32, the hard decision was made, and Eastex was euthanized on March 25, 2013, due to complications of old age. Andy Golden knew the end was coming, so he commissioned a master carver from Poland to make a headstone for the great horse. The stone says – Eastex ‘A True Champion’. Eastex was buried near one of his old pasture-mates at Dee and Betty Raper’s farm south of Norman, Oklahoma.

The gelding held the distinction of being the all-time leading money earning 2 year old for 27 years, only to be overtaken by Stolis Winner in 2008. Known as the “Champion,” Eastex was intelligent, noble and proud. His orneriness stoked his competitive spirit. But, he was also a gentle giant who loved people and life. His popularity never faded, and he is still missed by those who saw him race, cared for him, and loved him.