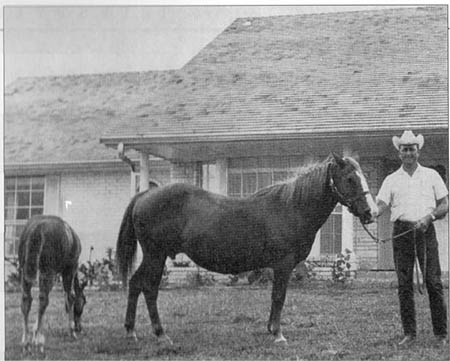 FL Lady Bug never performed on the racetrack or in the show ring, but she has earned her place in the AQHA Hall of Fame as a producer of top-quality Quarter Horse runners. FL Lady Bug was foaled in 1945 and bred by W. A. Yeager of Woodward, Oklahoma.  She was by Sergeant and out of Yeager’s Lady JA.  She was owned by Marvin and Lela Barnes for most of her producing years. FL Lady Bug was bred to produce working horses most of her life because pari-mutuel racing was outlawed in Oklahoma at the time.  In 1952, the sorrel mare foaled Rocky Bert, a top tie-down roping horse by Bert, and the first indication that she could be a speed producer.  Rocky Bert raced in several match races and became a consistent AA campaigner. The potency of her speed was shown in her first foals, which were not sired by proven progenitors of racehorses.  These foals included five starters – one AAAT and two AAA – that earned 29 wins, one stakes win, five racing Registers of Merit and more than $16,000 in winnings. Her daughter Top Ladybug by Top Deck (TB) was the 1966 champion 2-year-old filly and earned $195,943 on the racetrack.  She won seven stakes races, including the 1966 Rainbow Futurity at Ruidoso Downs in New Mexico. Top Ladybug placed third in the All American Futurity at Ruidoso Downs in 1966.  But in the 1968 All American, she was the dam of second-place Lady Bug’s Moon and the granddam of third-place Top Bug and fourth-place Ralph’s Lady Bug.  Ruidoso Downs officials jokingly quipped that “the race must be bugged.” Ralph’s Lady Bug was bred to Top Moon in 1972, and the mating produced 1975 All American winner Bugs Alive In 75.

All in all, FL Lady Bug produced 14 foals – 11 starters, 10 winners, four stakes placers and one world champion, with total combined earnings of $520,414.  Her produce earned 14 Registers of Merit and two Superior race awards. FL Lady Bug died in 1974 at 29.  She was inducted into the American Quarter Horse Hall of Fame in 1999 and the Oklahoma Quarter Horse Hall of Fame in 2009.