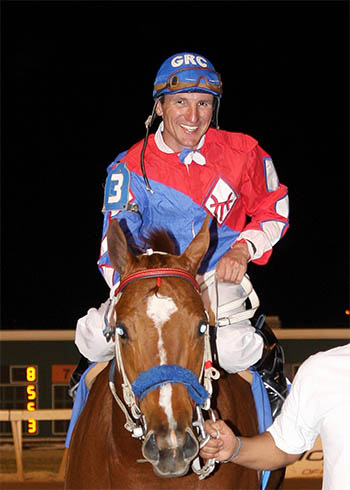 He may be smaller in stature, but George Robert “G.R.” Carter Jr is a BIG DEAL in his chosen profession!  At 47 years old, he is retiring at the top in his field, a legend in his own time. GR is a professional American Quarter Horse jockey.

If we analyze his past performance as we would a good racehorse, he’d have to be the high weight in the race.  In 2008, he became the all-time leading money earning jockey in American Quarter Horse racing history.  In 2009, Governor Brad Henry declared May 31, 2009 as GR Carter Day in Oklahoma. With winnings of over $70 million, that’s not the only record he has surpassed, he has ridden more mounts than any other rider in the history of AQHA racing, nearly 24,000 horses.  In 2014 he also became the all-time leader in Quarter Horse wins when he won his 3,632 race beating the former record set by Bubba Brossette, and by the end of 2015 that number has grown to 3806 wins.  GR was recognized as the American Quarter Horse Association World Champion Jockey 10 times, including six years consecutively.  In fact, Carter holds the record for the most wins in three different breeds, American Quarter Horses, American Paint Horses, and Appaloosas.  He’s likely to be one of the few people you may ever meet that has his own Wikipedia page and his own bobble-head.

G.R is a Native American of Osage heritage who grew up in Pawhuska, Oklahoma.   Known for his highly competitive nature, as a teen he was a State Champion Gymnast, and during his senior year at Pawhuska High School, Carter won the Class A State Wrestling Championship. It was his drive to compete in rodeo events that led him as a 14 year old kid to start galloping a few racehorses for a local trainer to earn entry fee money.  By the time he was a senior, he was riding races at Eureka Downs and Blue Ribbon Downs almost every weekend.

After graduating high school, GR moved to Sallisaw, Oklahoma to become a full time rider at Blue Ribbon Downs. In the early 1990’s he left Oklahoma and moved across the country to become a regular rider at Los Alamitos Race Course in Southern California.  After several very successful years in California, GR moved back to Oklahoma and his impressive resume of riding accomplishments continued to grow.

Known for his famous back flip dismount after winning a big race, Oklahoman’s have had many opportunities to witness his athletic ability.  With 18 leading rider titles, his tenure at Remington Park is unsurpassed in the record books. He has won the Heritage Place Futurity(G1) five times as well as four wins in the Leo Stakes(G1) and three victories in the prestigious Remington Park Invitational Championship(G1) just to name a few. GR also earned leading rider titles at Blue Ribbon, Fair Meadows, and Will Rogers Downs multiple times. He won the All American Futurity (G1) at Ruidoso Downs, Quarter Horse racing’s equivalent to the Kentucky Derby twice, piloting Falling In Loveagain for Jack Brooks in 1998 and Stolis Winner for Heath Taylor in 2008.

Giving back is something Carter takes to heart, with fans and charitable events, and also with his tireless efforts for the Jockeys’ Guild where he has served as vice-chairman of the board.  GR is passionate about the work that is done behind the scenes to ensure the health and welfare of professional jockeys. Carter is walking away sound and healthy, but he reminisces about many of his fellow riders that were not as fortunate when he talks about how the work of the Jockey’s Guild is so important.

Carter is always a man with a plan and he implements the plans with an unmatched work ethic.  After a holiday vacation in Ruidoso over Christmas, he and Shaena returned to Oklahoma and GR is already focused on his newest venture.  In 2012 he and Shaena invested in a pipeline service company, Arrowhead Pipeline Services.  Natural gas lines need to be inspected every 10 years and if there are any anomalies then Arrowhead is one of the companies that perform those repairs.  “I plan on just getting out on the jobs and seeing how they do it,” Carter said. “I want to learn the on-site stuff and get to the point where I can oversee a crew.”  As always, there is the Carter work ethic.

“Anything you do in life is about dedicating your life to it and hard work,” he said.  “It’s hard not to get emotional – riding is all I’ve done for 30 years but I can’t do it forever. In a recent interview GR was quoted, “It’s going to be hard next summer when the Rainbow and the All American are run.  If Mike (Joiner) called about riding First Valiant Sign or Clint (Crawford) called about Jess Good Candy, I’d have to think about it.”

Has he performed his last “big race backflip?”