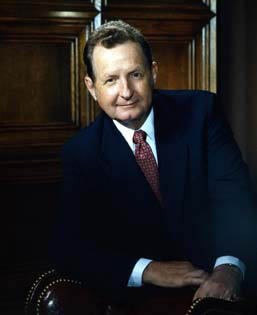 G F “Jack” Anderson caught Quarter Horse fever in 1948 when the Association was just getting off the ground.

He was born in St. Joseph, MO, the only son of Glenn and Luella Anderson. His interest in horses came from the time he spent as a boy on his grandfather’s horse and mule farm.

Jack was a hard worker all of his life and was a great student and athlete. He earned a football scholarship to Missouri University but enlisted in the Naval Air Force and flew Corsairs off aircraft carriers in the South Pacific during WWII. He received a BA in political science from Westminster College where he was president of the student body and earned an internship to American University in Washington, DC

After service as a Naval Aviator during World War II, he returned to Missouri and entered Westminster College.  After graduating college, he moved to Tulsa, Oklahoma, and got involved in the oil boom.  With a good judgment and a little luck, Anderson was able to parlay his stake into some real money as an independent operator

Breeding for the blondes, he dipped into the yellow vat of Hank Wiescamp’s lines to increase his chances of striking gold – palomino gold, that is. He had a special fondness for yellow horses, and set out to breed them.  He bred palomino stallions to sorrel mares in the pursuit of yellow foals.  Then he went to the king breeder of the yellow horse, Wiescamp, and partnered with a friend on a colt named Sir Barton by Spot Cash by Skipper W.  Later he bought a son of Skipper W called Skipador W.  Other stallions he owned were Bos’n, Taco Bar, Beatle Luck and part interest in a full brother to Zan Parr Bar named Par’s Music Bar.  One of the best colts Anderson raised was Buzzie Bars, by Bud Warren’s great horse, Sugar Bars and out of a yellow daughter of Bos’n.  Buzzie Bars stood grand champion at 50 Palomino Horse Breeders of America horse shows, but went blind after being retired to stud.

Jack married Genelle Martin and spent the rest of his life in Tulsa and Broken Arrow. He was in the oil business, traded in real estate and on the Bent Arrow Ranch, he raised champion Palominos and giant homing pigeons. His wife, Genelle died in 1993. A few years later, he re-discovered his former high school sweetheart, Lynn Bowen Mensch at their 55th high school reunion and they were married in November of 1997.

Anderson was president of the Palomino Horse Breeders of America, Oklahoma Palomino Exhibitor Association and the Oklahoma Quarter Horse Association.  He was elected to AQHA Director in 1971, and served on the public information committee.  In 1974, when the AJQHA World Championship Show moved to Tulsa, Anderson served on the youth activities committee, and was a major force in the volunteer group in Tulsa that hosted the show.  He was elected to AQHA’s executive committee in 1979 and became president in 1983.