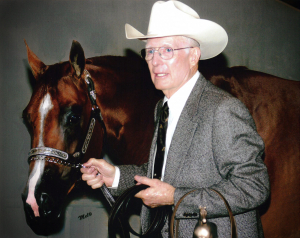 Cantrell turned into a lifetime of owning, breeding, raising, showing; and selling some of the best in the business. His focus has always been on great mares. His plan was put into motion in the early 7Os with the purchase of Jameen Tivio, who bred to Doc Bar, produced Docs Prescription. He then put together a great set of horses, hired Ronnie Rice for the performance and Cindy Buchanan for the halter, and sent a show string dawn the road that was a force to be reckoned with, These included: Shes A Tailwind, who won Grand Champion Mare and Senior Western Pleasure at the 1974 National Western Stock Show, Lucky Kim Bar, A Girl Named Susie, Miss Straw Bals and Sailors Qtrcis Queen. He also partnered with Jerry Wells on a young stallion named Sonny Go Lucky, who became a world champion.