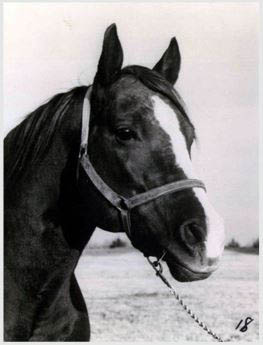 An outstanding son of King P234, Hank H was foaled in 1942. Owned and shown by the Smith family – father Tom and sons Jack and Paul – he left a lasting impression on the Quarter Horse Industry, which is particularly impressive because of his short life span of only 10 years.

Hank H was featured in the September 1947 issue of Collier’s magazine, depicting the “perfect head” of a Quarter Horse. During World War II, Jack was in the Navy, stationed in California, and Tom took Hank H out so Jack could train him.

Hank H earned the highest race rating of those days – AA – in Tucson, Arizona, where he was officially credited with 2 wins 1 second and 3 thirds in 7 starts.

In articles about Hank  H in the June and July 2006 issues of Working Horse magazine, Larry Thornton astutely observes that most influential stallions are those who have produced the most foals.  But every now and then, Thornton continues, a stallion comes along that sires a limited number of foals but they still have a lasting affect on the breed.  Such is the story of Hank H who sired only 137 foals in his short life span.  Notable among those few are:

This tribute to Hank H would be incomplete without including a tribute to the Smith family – and in particular to Jack Smith who was the third President of the Oklahoma Quarter Horse Association – serving in that capacity in 1949 and again in 1950.