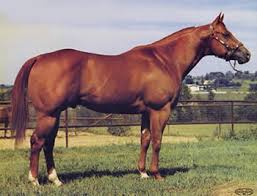 Impressive was born an Appendix American Quarter Horse, who earned his full AQHA registration in 1971. He was the 1974 World Champion Open Aged halter stallion, the first such World Champion in his breed, despite carrying only 48 halter points in total. He is famous for his highly successful progeny, having sired 2,250 foals. Nearly thirty of his offspring went on to be World Champions themselves.

In his showing days, Impressive changed hands a number of times, perhaps his most famous owner being Dean Landers, who also owned the famous halter stallions Two Eyed Jack, Coy’s Bonanza, and Sonny Dee Bar. Although Impressive raced for a short time after Landers sold him to Fennel Brown, he was quickly excluded from any performance discipline due to pedal osteitis, leaving halter as his only choice. His groundbreaking 1974 World Championship soon cemented his role in that discipline. Each time Impressive was resold, his price rose quickly; at one point, an offer of $300,000 for him was refused by Brown, who said “ain’t nobody in this world got enough money to buy this horse.”

Impressive was highly sought after for breeding, despite at one time carrying the outrageously high stud fee of $25,000. He sired a total of 2,250 foals, and as of 2003, was estimated to have in excess of 55,000 living descendants. He was bred for his muscular and refined form, which was passed on to his get often enough to make him at least the #5 all-time leading quarter horse sire when ranked by AQHA points earned by all progeny combined. Perhaps his greatest foal is Noble Tradition, a four-time World Champion stallion in halter, who has gone on to be a highly successful sire himself.

Impressive was inducted into the Oklahoma Quarter Horse Hall of Fame