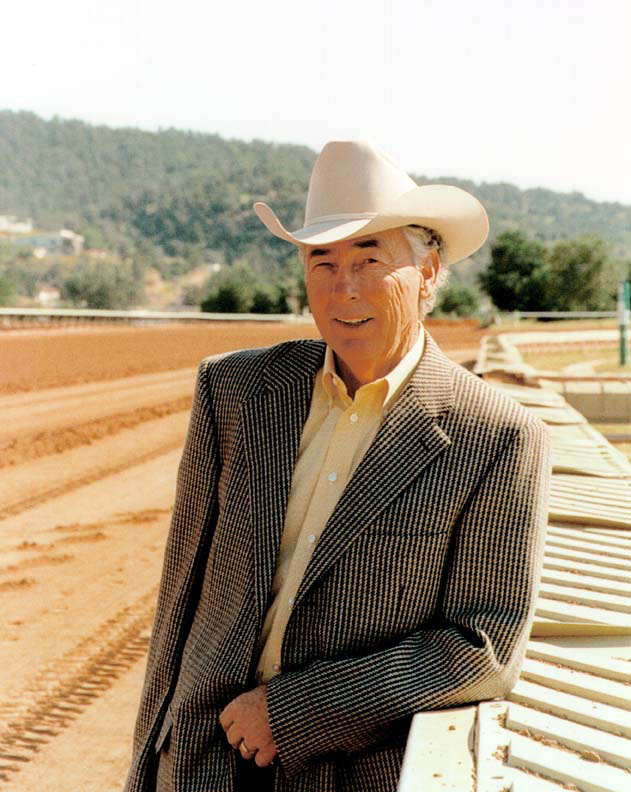 Few people get to make a career out of doing what they love.  Jack Brooks was an exception. Brooks learned the trade of training horses from the ground up, breaking colts and riding on bush tracks and county fairgrounds while growing up on his dad’s ranch near Blanchard, Oklahoma. He trained one of the family’s mares to jump.  His dad could not figure out why the mare kept getting out until he saw his son jumping her out to gather the cows.  Brooks figured it was easier than getting off to open the gate. Brooks first made his presence as a trainer known in 1969, when Hell’s To Betsy outran Easy Jet in the Oklahoma Futurity.  He later received the name “Mr. All American” when he went on to train the winning horses of a record eight All American Futurities. His first All American win was in 1978, sending out champion Moon Lark to score in the world’s first $1 million horse race.  Four years later, he won his second All American, conditioning Mr Master Bug and Miss Squaw Hand to run 1-2 in the world’s first $2 million race.  Brooks won the race in 1985 with Mr Trucka Jet, in 1988 with world champion Merganser, in 1989 with Strawberry Silk, in 1992 with champion Dash Thru Traffic, in 1998 with Fallin In Loveagain and in 2000 with champion Eyesa Special.   Brooks’ horses made more than 9,500 starts and earned more than $33.2 million between 1970 and 2004.  He has held the title Oklahoma Quarter Horse Racing Association trainer of the year five times.  He also won the Quarter Horse conditioning title six times at Ruidoso Downs and twice at Remington Park in Oklahoma City.  In 1992, he received Sunland Park’s Bob Haynesworth Sportsmanship award.   Jack Brooks was inducted into the American Quarter Horse Hall of Fame in 2004 and the Oklahoma Hall of Fame in 2008.