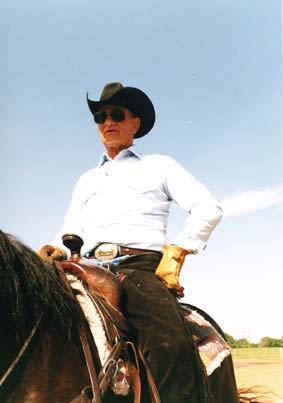 From helping the careers of many professional trainers, including his daughter Jackie Krshka and his nephew Pete Kyle, to teaching the basics to newcomers to the Quarter Horse industry, Jack Kyle was a distinguished role model and has been described as “a legend in his own time.”

Kyle was born in 1925 on a ranch 40 miles from Brownfield, Texas.  When he was old enough to start first grade, he and his brothers saddled up before sunrise to ride 14 miles to school, never being tardy.  His family later moved closer to civilization, to a cow outfit near Fort Sumner, New Mexico.

Kyle was a founder of the New Mexico Quarter Horse Association, and served as a director for more than 30 years and one term as president.  He also served as an AQHA judge for 24 years, assisting with seminars and helping to define the rules for judged roping events.  He officiated the first AQHA World Championship Show and the first NRHA Futurity, and he won the first western riding class held at the New Mexico State Fair in the early 1950s.