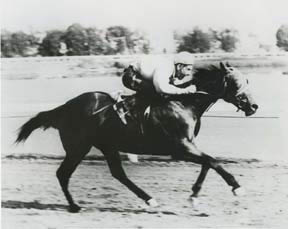 “If that’s a racehorse, then I’m gonna quit the business,” Bud Warren, Perry, Oklahoma, said in 1961 after looking at a thin-necked, pot-bellied bay colt. At the time, Jet Deck did not inspire Warren, but that would all change.

Jet Deck was foaled in the spring of 1960 on William H. and James V. A. Carter’s California ranch. J. B. Chambers of Colorado bought the colt as a yearling, and it was in Chambers’ barn that Warren made his statement about the colt.

As a 2-year-old, Jet Deck was put into training with Wilbur Stuchal. It was not long before Stuchal knew he had a serious racehorse on his hands.

In his freshman year, Jet Deck was named the champion 2-year-old colt and champion stallion. The next year, the bay was named world champion racehorse.

Jet Deck was literally at the height of his prime as a stallion in August 1971. Warren was in Ruidoso, New Mexico, when long-time employee Dean Schultz called to tell him that Jet Deck was dead.  He was only 11.

An autopsy found a massive overdose of barbiturates in the horse’s bloodstream. Tire tracks were found on a nearby country road and boot tracks led to and from Jet Deck’s paddock.  He was such a gentle-natured stallion that it would not have taken much to convince Jet Deck you were a friend.

The mystery surrounding the stallion’s death was never solved.

“He had great conformation, great desire and determination, and the best coordination of any horse I’ve ever seen in my life,” Stuchal said. “As a sire, he was the greatest.  His loss to the horse breeding industry can’t be evaluated.”