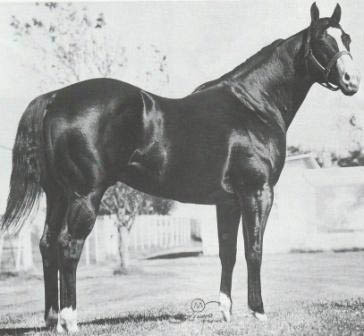 Cleo Maddon claims her husband, C.L.“Tess” Maddon, named the stallion.  Tess was a legend in New Mexico for his race horses, and was a “drinking man”.  He named the horse for his best drinking buddies “Johnny” and “Boone”.  Later his owner Cleo Maddon, moved from the old home place to Willard, New Mexico to stand the stallion, in what she considered a “hub of the racing Quarter Horse world.  Then he stood at the popular Frisco, Texas ranch owned by B F Phillips.  In 1978, the Maddons sold Johnny Boone to Dan and Charlotte Dailey from Tupelo, OK.

When Johnny Boone was twenty years old, Dan was convinced that the stallion could be a leading sire.  He only needed more foals on the track.  Dan lowered Johnny Boone’s stud fee and over 100 horse breeders came that first year.  Some say that Johnny Boone was a “poor boy’s horse,” something affordable and his offspring were athletes who could cut, rope, run barrels and race.  Hunka Boone 86 SI became a roping champion multiple times and went to the National Finals Rodeo several years.

In 1985, Johnny Boone’s get were the first and second place horses in the Darrell Rose Memorial Futurity, Ronnie Boone 102 SI and Sunny Boone Suite 100 SI.  The winners kept coming, and he sired Appaloosa and Paint runners.

Dan Dailey decided to sponsor the Johnny Boone Futurity at Ross Meadows in Ada, OK.  He added $1000 to the purse and only 2 year old Johnny Boone foals were eligible.  The purse grew to $15,000.  There were over thirty Johnny Boone foals in the first trials.  No other stallion in the area had such a futurity.