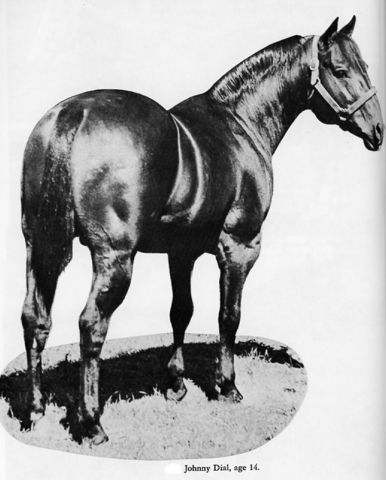 The story of Johnny Dial is a story of both fact and fable. Bred by Charles Hepler of Pinon, New Mexico, Johnny Dial was a 1948 son of the legendary Depth Charge (TB).

Racing from age two to four (1950 through 1953), he amassed a bankroll of $22,906 and was the American Quarter Horse Association’s World Champion in 1952 after winning the Ruidoso Stallion Stakes and placing in the California Championship at Los Alamitos.

As a two-year-old and three-year-old, the brown sprinter also placed in the New Mexico State Fair Futurity and State Fair Stallion Stakes at Albuquerque and the Lincoln County Stakes at Ruidoso.

Although he was bred and raced by non-Okies, it was as a sire that he became an Oklahoma legend.  Johnnie Dial was recognized back then as one of the top Oklahoma sires, standing at Rowland Stanfield’s Stallion Station in Broken Arrow, OK.  His first foals were born in 1953 and began racing in 1955.

Earl Shapiro, Johnny Dial’s final owner, was raised in Festus, MO. He was father to four children, a successful business owner, a property developer, a political behind-the-scenes guy, a city council member, a survivor of five WWII campaigns  (Africa, Sicily, Anzio, France, and Germany), and an escapee of a POW camp. Though Earl had many interests, he was most passionate about quarter horses.

Earl was enthralled with bloodlines and voraciously studied, compared and analyzed them. Night after night, he pondered the bloodlines of winning quarter horses in his effort to arrive at a promising combination for a new generation of winners. There was no Internet at this time; there was only paper information. A typical midnight reading located next his bedside would be loaded with everything imaginable about bloodlines. At times, the bed and floors were covered with paper.

What he noticed was that Johnny Dial coupled with mares of Leo’s lineage produced solid performers who, at the time, were greatly undervalued in the market.  Steadfast in his conviction, Earl Shapiro purchased Johnny Dial in 1968 for $25,000 (in today dollars, $171,865.04). With that, and at the ripe old age of 20, Johnny Dial moved to Festus, MO.

This was not an easy task to accomplish.  Earl first had to deal with equipment and construction tycoon Ed Honnen, owner of Quincy Farms in Aurora, CO, famous for the brand “2” up and the “2” down.  Earl would address Ed Honnen as “Easy Ed,” and later just “Easy.”  This made many of the Quincy Farm’s employees leave rapidly to escape the explosive response. Ed’s reputation was larger than life. He learned how to rope cattle at 60 years old; he was as a hard-core businessman just like Shapiro, but where Earl could be charming Honnen was more disciplined. “If you are so smart, why are you not rich and I AM rich” is a direct quote from Ed Honnen. Somehow this kinship between Earl and Easy would continue throughout the years. Their mutual admiration for Johnny Dial and each other kindled a long-term friendship.

Earl’s son Gregg remembers going with his father to Quincy Farms and picking up Johnny when he was11 years old.  They waited for four days for Honnen to return from a business trip. Only with Honnen’s approval would Johnny Dial be released to the new owner regardless of what any paperwork might indicate.

Johnny was a small horse, no more than 14.2 hands.  He was Honnen’s wingman: the perfect companion. Johnny’s personality of determination was similar to his last two owners Ed Honnen and Earl Shapiro. Champions are made up of more than physical confirmation; it has to be internal, and they have to have the determination to achieve the goal. Johnny was all business.

In buying Johnny, Earl Shapiro had a vision. It was important to win races, but it was more important was to sell horses. In his studies, he was convinced that with Johnny Dial as the broodmare sire, he would stretch the bloodlines to a winning brood mare assembly. That winner at the track would be the outcome.

Johnny Dial had the most lavish stall in the farm in Festus, MO. It was 25 by 25 feet, heated, with piped-in water, and constantly freshened straw. The Shapiro children unfailingly considered that Johnny’s accommodations, relativity speaking, were with par with their own household. If Earl’s wife Virginia would have allowed it, Johnny would have had a place in their home, in the bedroom next to children or maybe instead of one of the children. At one time the walk-out basement was actually considered.

At twenty years, and two times a day, five to six days a week, Johnny was still a virile stud. Johnny was a pace setter for the advantage age sires. Since in the early years of his life Johnny was underused as a stud horse, he was making it for lost time.

The stories of Johnny breaking from the starting gates were legendary. Johnny Dial was a challenge to ride out of the starting gate. At times he would be yawning and look almost asleep in the starting gate, but when the gate would open and the bell sounded, no other horse broke harder than Johnny Dial.  Jockeys of that time traded tales about almost falling off him from his explosive instant energy out of the gate.

Everyone at the Shapiro Farm could attest that swinging stall door quickly, and NOT stepping into the opening until Johnny ran past was the only safe way to turn him into the pasture. The startling burst of speed out of the stall probably rekindled his memories of early days out of the gate. Even at the end of his years, Johnny would come out of the stall door with an athletic amount of speed and determination.  Toward the end of his life, his initial burst of speed would be followed by endless hours of Johnny lying down in the tall grass in the sun sleeping.

As Johnny advanced in years, he was relaxed and pleasant to be around.  Johnny passed away in his sleep.  It was a sad day for the Shapiro family and he is still mourned.

Although they could not attend tonight, the Shapiro family wishes convey their appreciation for this acknowledgment of Johnny Dial. Johnny was a part of their family and memories. If Earl Shapiro was alive, he would be grinning ear to ear telling everyone that he was right forty years ago.  He would tell you, “There were two kinds of people in this world.  People who wanted Johnny Dial mares, and people that had them.”