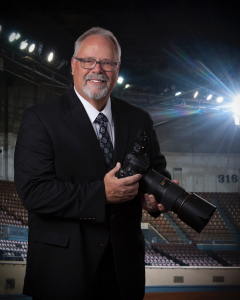 K.C. Montgomery began his career as a photographer back in 1984, although his passion for photography started during his college days at the University of Oklahoma. He pursued that passion through his love of horses by developing a style of equine conformation photography that became in high demand. K.C. was the official photographer of such prestigious equine events as the American Quarter Horse World Championship Shows, the American Paint Horse World Shows, the PHBA World Championship Horse Show as well as the former official photographer for the European Championships in Germany for almost a decade. K.C. has had the opportunity to work for clients throughout the United States, Germany, France, Switzerland, Austria, Belgium, England, and Brazil. He and his wife and daughter Ashley currently own and operate an advertising agency which caters to the western and equine industries as well as the photography business.