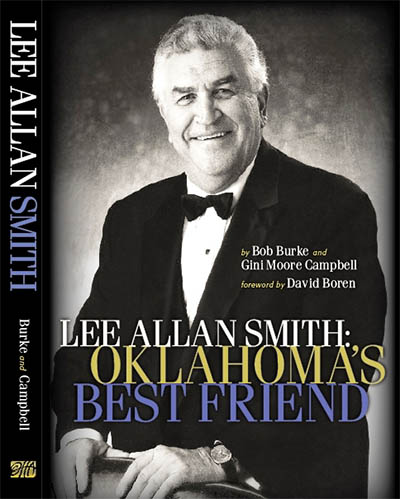 The 2012 recipient of the Bud Breeding Oklahoma Spirit Award, Lee Allan Smith was born  in Oklahoma City, November 13, 1929, and lives in Oklahoma City with his wife, DeAnn.   They have three daughters, DeLee, Jennifer and Wendy.  During his lifetime he has worn many hats and had many titles, but the two most definitive of his contributions to the State of Oklahoma are Mr. Oklahoma and Oklahoma’s  Best Friend.

Lee Allan is Chairman of Oklahoma Events, LLC which is a full-service event production firm.  He  also served as Vice-Chairman of Ackerman McQueen and President of Oklahoma Centennial Sports, Inc, which was the local organizing committee for the U.S. Olympic Festival in Oklahoma.

During his three year tenure as Chairman of the Oklahoma City Chamber of Commerce, he was deeply involved in the development of Remington Park and in convincing

Mr. De Bartolo to make that investment in Oklahoma City.   During his career he has served on the Board of virtually every civic organization or activity in Oklahoma City, and at one time or another has been either President or Chairman of most of them.  To name a few, he was President of Allied Arts of Oklahoma for three years, President of the Oklahoma Zoological Society and was instrumental in establishing the Zoo’s  fabulous aquaticus exhibit.   He was Chairman of the Oklahoma Heritage Association, President for three years of the Last Frontier Council, Boy Scouts of America, creator and developer of Stars and Stripes Park, and was founder and producer of the Stars and Stripes Show which was aired on the NBC network for five years.  Lee Allan orchestrated the Dome Dedication at the State Capital, and was instrumental in all of the planning for, and conducting of,  Oklahoma  Centennial Celebration in 2007.

Lee Allan attended Oklahoma City public schools, graduated from the University of Oklahoma, became a First Lieutenant in the United States Air Force, and served his country in Austria, Germany and Libya.

We are all familiar with the bronze Quarter Horse statue that graces the front of the Norick Arena at Oklahoma City’s State Fair Park.  But what you may not know is that, because of his position on the State Fair Board and to acknowledge and commemorate the partnership that  has developed between the American Quarter Horse Association and Oklahoma City, Lee Allan Smith conceived it, raised the money for it, found the sculptor in Enid, Oklahoma, to make it, arranged for its erection and produced the unveiling ceremony.

Due to time constraints, we cannot recite all of the Boards on which he has served, or is now serving, but we would be remiss if we failed to mention the National Cowboy and Western Heritage Museum Advisory Board.  Neither can we enumerate all of the awards and honors that he has received, but to mention a few :

Oklahoma Association of Broadcasters Hall of Fame, Honorary Doctor of Humane Letters Degree from the University of Oklahoma, and the  very prestigious Oklahoma Hall of Fame.