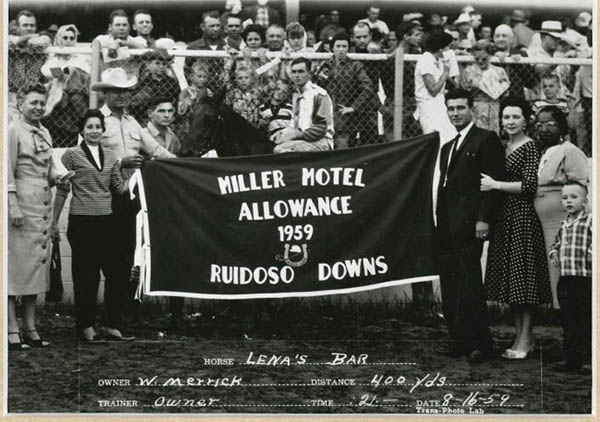 Lena’s Bar (TB) came from a line of great runners and passed on the legacy.

Lena’s Bar (TB) was bred and owned her entire life by legendary horseman and American Quarter Horse Hall of Fame member Walter Merrick, Sayre, OK.  The chestnut mare was sired by Three Bars (TB) and out of Lena Valenti by Gray Dream in 1954.

The mare did not start her running career until she was 3.  New Mexico was the only state that allowed Thoroughbreds to compete in regular Quarter Horse races during the 1950s.  However, Thoroughbreds were not allowed to participate in the Quarter Horse futurities for two-year-olds.  Lena’s Bar finally got her start in 1957, starting eight times and winning four.

Lena’s Bar was put into Merrick’s broodmare band in 1962.  She produced five foals, each of which won races and earned Registers of Merit on the track, while earning $557,199.

Lena’s Bar was bred to Tonto Bars Hank, winner of the 1960 All American Futurity and Champion Quarter Horse Running Stallion.  Her first foal was Delta Rose who had 16 starts as a two and three year old and won three races and placed in four stakes.  Her second filly by this cross was Mayflower Ann.  From 23 starts, she garnered ten wins and was stakes placed.

The mare’s two most successful offspring resulted from her courtship with Jet Deck, a racing world champion who was the first Quarter Horse to earn more than $200,000 on the straightaways.  AQHA Champion, Jet Smooth became successful on the track, in the show arena and as a breeding stallion.  Easy Jet, her last foal, and perhaps her most famous foal, redefined what it was to be a Champion Racing Quarter Horse and highly successful stallion.  He sired 348 racing ROM earners, 18 performance ROM earners and 23 halter point earners.  His get earned $2,546,842 on the tracks.

Lena’s Bar was inducted into the American Quarter Horse Hall of Fame in 2003.