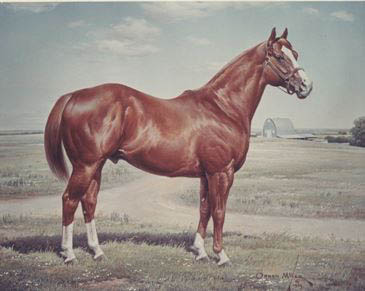 Leo, a 1940 stallion sired by Joe Reed II and out of Little Fanny, is by any measurement, one of the all time great sires of the Quarter Horse world.  Displaying considerable speed himself by winning 20 of his 22 starts, it was his reputation as a sire that made him famous.

An all time leading sire of broodmares, Leo’s daughters produced 14 Champions, including Little Blue Sheep, Kid Meyers and an All American Futurity winner, Goetta.  His most famous daughter, Garrett’s Miss Pawhuska – who will be inducted into the AQHA Hall of Fame in about 2 months – produced Champions Vanetta Dee, Vannevar and Vandy’s Flash.

Administered by the AQHA Hall of Fame and Museum, the Historical Marker program of the AQHA Foundation perpetuates the history of the American Quarter Horse.  Leo is one of only three horses to have had a Historical Marker erected in his honor. It was dedicated in September 1969 in Perry, Oklahoma.

1989 was the first year that horses were inducted into the AQHA Hall of Fame, and Leo was the second horse inducted.

We are honored tonight to induct this great horse into the OQHA Hall of Fame.