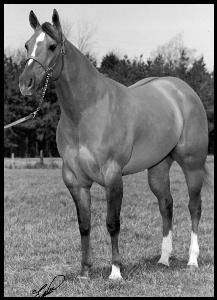 Miss Jim 45’s sire was Jim Harlan and her dam was a Waggoner Ranch mare named Miss Paulo 45.Her sire traced back to King P-234 as well as Peter McCue, Traveler and Oklahoma Star P-6. Her dam traced to many of the same sires, including King P-234, Traveler, Peter McCue and Yellow Jacket.

“She was the prettiest red dun mare you ever saw,” Frank Merrill said of Miss Jim 45. “Everything Miss Jim 45 did, she did pretty.”

Miss Jim 45 was bred by James Nance of El Reno, Oklahoma, and was by Jim Harlan and out of the Waggoner Ranch mare Miss Paulo’s 45. Nance showed her to the Oklahoma high-point filly title as a yearling and 2-year-old. Matlock Rose and George Tyler bought her in February 1969.

Between February and June 1969, the filly was shown 69 times, with 65 firsts, three seconds and a third.

Frank Merrill noticed the red dun mare in the May 1969 Western Horseman. He knew then that he wanted that horse and decided to give Rose a call.

Merrill made the trip to Gainesville, Texas, in June after school ended. When Miss Jim 45 was walked out of her stall, all Merrill saw of her was her head and neck and knew he had to own her. Tyler declined Merrill’s first offer of $20,000, but accepted a deal for $25,000 the next morning.

Merrill sold Miss Jim 45 to Michael Mulberger of Arizona in May 1971. Her lone offspring was a 1973 bay colt by Boston Mac. A racing Register of Merit earner, Mr Colt 45 started seven races with earnings of $696.

A. B. Green
Scroll to top