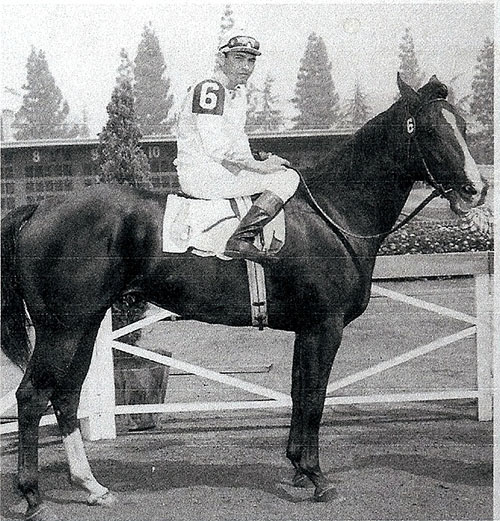 Miss Meyers was one of 35 foals from Leo’s 1949 crop, and was the second of seven foals from her dam, the Oklahoma Star mar Star’s Lou.  Bred by O.C. “Blondy” Meyer, the sorrel mare was foaled at his Konowa, Oklahoma ranch.

Her official race record began as a 4-year-old, and during the following five years she made 59 starts.  Miss Meyers placed first 17 times, second 15 times and third five times, and earned $28,727.  In her first official start, she was defeated by champion Leolita, but her next start proved her to be a winner.  Miss Meyers won races in Oklahoma, Colorado and New Mexico.

In 1953, she went to Los Alamitos in California to compete, three days after winning the California Championship, Miss Meyers was purchased for $6,000 by A.B. Green of Purcell, Oklahoma.  She won nine of her 17 starts that year, set four track records, was the highest money-earning horse and was named World Champion and Champion mare.

Two years after her championship season, the seven-time stakes winner retired and became a broodmare.  She produced four foals during her broodmare career.  Her first foal was Oh My Oh, a 1957 daughter of Spotted Bull (TB).  Oh My Oh produced 1968 All American Futurity winner Three Oh’s.  Miss Meyers’ second foal was champion Mr. Meyers, a son of Go Man Go who won the Kansas Futurity and earned $25,619 over three years on the track.  Mr. Meyers later sired winners of more than $1.2 million.

Her last foal, a sorrel son of Three Bars (TB), was born a month before Miss Meyers died of colic in 1963.  Green’s wife raised the foal, later named Kid Meyer’s, on a bottle in their backyard.  The orphaned foal went on to become the first AQHA Supreme Champion and sired Mr. Kid Charge, who won the 1971 All American Futurity.

Miss Meyers was inducted into the American Quarter Horse Hall of Fame in 2009.