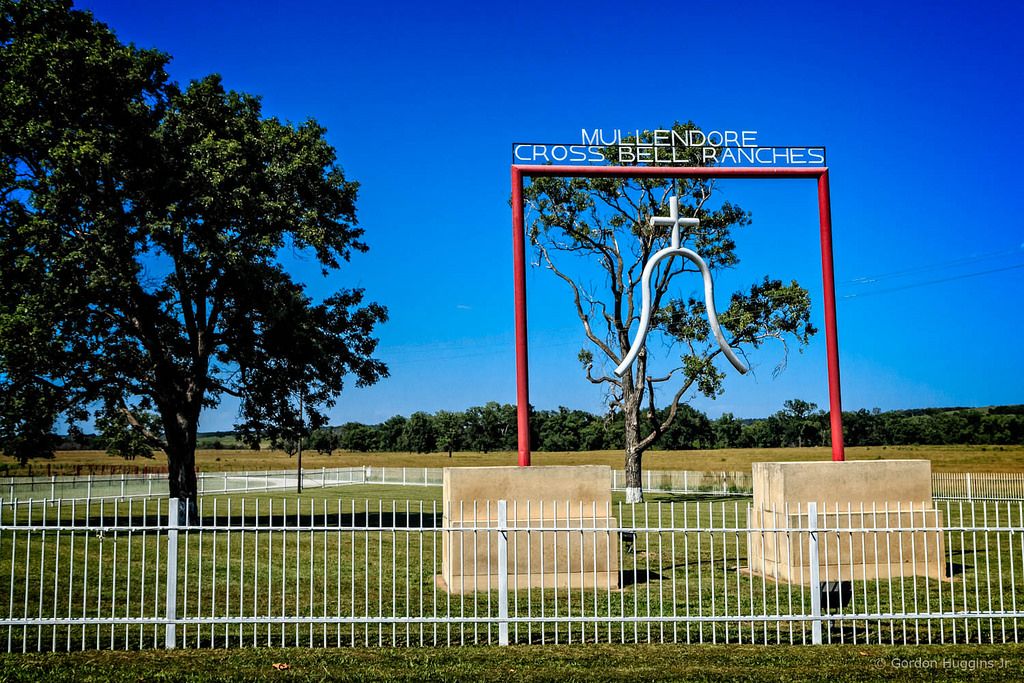 Eugene Claremont “Gene” Mullendore was born in 1905 in Cleveland, Oklahoma while Kathleen Boren was born 1905 in Caney, Kansas.  Her parents rode 45 miles on their horses to register Kathleen’s birth at the Osage Indian Agency. Thus making her eligible as an original allottee to receive Osage Headright.  Each allotte was issued 640 acres and an interest in Mineral Rights owned by the Tribe.

The main Cross Bell Headquarters are located on that original 640 acres.  On December 21, 1926 Kathleen and Gene were married in Caney, Kansas.  Together they built an empire which, at one time, covered more than 130,000 acres along the Kansas/Oklahoma border.

Eventually, they purchased the Boren Ranch owned by Kathleen’s parents, the Little Chief Ranch in Fairfax and the Bird Creek Ranch in Pawhuska.

They focused on breeding fine Quarter Horses to work the large cattle operation they had developed.  They raised the best of the best Hereford cattle and were recognized as the largest cattle shippers ever on the Santa Fe Railroad.

The Ranch also raised hogs for market and to feed the Mullendore Family and the cowboys and their families.  Large goat herds were used keep the land clear and dairy cattle supplied milk and butter for everyone on the Ranch.  Sheep were sheered to make their blankets.

The Cross Bell also had farmland which produced wheat, corn, apples, pecans, and potatoes.  They baled hay and in the winter when the animals had to be fed, they used wagon teams pulled by mules.

The Mullendore mules were known as the best in the Country.  At one point, 600 head were sent to Kansas City to be sold to the Government to be used in the war.

Although the Ranch contained a multitude of animals, their true love was the American Quarter Horse and the challenge of acquiring the best Stallions and Mares to improve the quality of their horses.          Among those were Little King, Cee Bar Badger, Roan Hancock, Bill Doolin, Doolin Bill, Rack Pal, Johnny Keen and Lowry Boy.  Their foundation bloodlines included Hank H, Three Bars, Vandy, Leo, Bacon Rind and Peter McCue.

Gene and Kathleen were partners. Kathleen was in charge of the Main House, the Cook House for the hands and also kept the books while Gene oversaw the ranch.

Eventually, they bought a small plane, which Kathleen piloted.  She would fly over the Ranch and if animals had gotten out, she would radio Gene.  She also flew to town to do the grocery shopping, pick up parts and farming equipment, and anything else the Ranch needed.

Eventually, they built a school on the Cross Bell for their children–a daughter, Katsy and a son, E.C. lll.  Their classmates were the children of the Cowboys who worked the ranch.

In 1960, due to failing eyesight, Gene handed the ranching operation over to his son, E.C. lll.  In 1970, E.C. was tragically killed in a shooting in his home on the Ranch.  The crime remains unsolved.

Although Gene was suffering complications from diabetes, he took charge of the Ranch again and continued until his death in 1973.  At which time Kathleen took the reins until she passed in 1998 at the age of 93.

It goes without saying that the Cross Bell Ranch has always been and remains today a family endeavor.  In addition to Gene and Kathleen including their children in the ranch business from a young age, there is now a third generation–their granddaughters, Little Katsy and Kathleen both competed on Cross Bell bred horses and have learned the ranching business as well.

Their love of family, respect for the land, knowledge of the livestock, and their work ethic are what make the Cross Bell Ranch so deserving of being inducted into the OQHA Hall of Fame.  The ranch and its history are a true example of the tradition of the American Frontier.