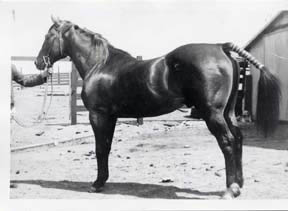 Known as “that Tommy Moore horse,” Oklahoma Star earned a reputation as a formidable running horse and an influential sire.

Foaled in the Oklahoma Panhandle in 1915, Oklahoma Star was by Dennis Reed (TB) and out of Cutthroat.  Moore began match-racing the bay as a 3-year-old.  His first race was 220 yards, and Oklahoma Star won easily against the reputed Slip Shoulder.  The stallion beat another well-regarded runner, and it did not take long for Oklahoma Star to run out of challengers. Oklahoma Star was also used as a breeding stallion.  Moore would breed the stallion hours before racing, but it never affected the bay’s performance.  The quality of mares ranged from race mares to Indian mares to buggy mares.  Regardless, Oklahoma Star always sired nice foals. In the early 1930s and one owner later, Ronald Mason, owner of the Cross J near Nowata, Oklahoma, bought Oklahoma Star.  The move allowed Oklahoma Star to breed higher quality mares. During the years spent at Mason’s ranch, Oklahoma Star excelled as a sire.  He earned a reputation as a sire of broodmares and roping horses. From the mid-1930’s through the mid-1950s, Oklahoma Star was the undisputed premier sire of roping horses.  Ropers Bob Crosby, Buddy May, Ike Rude, the Goodspeed brothers and others roped from Oklahoma Star horses.  A couple of the more noted roping horses were Baldy Boy and “Buster.” Some of Oklahoma Star’s more renowned sons were Congress Star, Starway, Osage Star, Nowata Star, Oklahoma Star Jr and Sizzler. In the late 1930s, Robert Denhardt visited Mason’s ranch to see Oklahoma Star.  Not long after the founding of AQHA, the stallion received the registration No. P-6, distinguishing him as one of the breed’s foundation sires. The stallion died in 1943 at 28.  He was inducted into the American Quarter Horse Hall of Fame in 1992 and the Oklahoma Quarter Horse Hall of Fame in 2005.