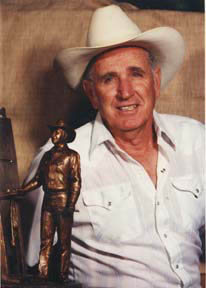 His fame did not come from raising champion Quarter Horses.  It was through his paint strokes that Orren Mixer became recognized throughout the world. Mixer was born in Oklahoma City in 1920 to Florence Motter and Orren Marion Mixer Sr. After attending public schools, he obtained a scholarship to attend the Kansas City Art Institute from 1938-40.

Mixer worked in graphic arts in New York, Oklahoma City, and Fort Worth, Texas, before moving to San Diego to work in an aircraft manufacturing plant. He returned to Fort Worth in 1943 and joined the U.S. Navy. Stationed in Chicago, he was a visual aids graphic artist.

In his personal time, Mixer painted Western scenes, and his first sales came through a Chicago sporting goods store. Discharged from the service in 1946, he brought his wife, Evelyn Leonard, whom he’d married in 1941, back to Oklahoma, where he built a house and studio near Arcadia/Edmond.

Mixer was a relatively unknown artist until 1941 when Robert Denhardt commissioned him to interpret the conformation standards of horses shown in various snapshots for the newly formed AQHA.

Mixer’s celebrity as a well-known western artist started during the 1950s and 1960s. Livestock, particularly horses, became his specialty, and his work graced the covers of Western Horseman, Quarter Horse Journal, Cattleman, and Oklahoma Today.

Then, at the 1968 AQHA convention, the public information committee resolved to commission a portrait of the “ideal” Quarter Horse for promotional purposes.  In June of 1968, Mixer presented his painting to the committee for inspection. Warren Shoemaker said there was only one thing wrong with the painting: The horse was not carrying Shoemaker’s brand.  The painting now hangs near the president’s room at AQHA’s headquarters.

Six other breed associations followed suit with commissions. He depicted the ideal Pinto, Paint, Palomino, Appaloosa, Buckskin, and Pony of the Americas

Over the years, Mixer painted Go Man Go, Three Bars (TB), King, Leo, Peter McCue and Wimpy.  The list does not begin to touch the number of paintings he did of champions or a beloved member of the family.  He also painted B. F. Phillips, Jr., Carol Rose, Matlock Rose, Bob Crosby, Walter Merrick and Shoat Webster.

Mixer bred and raised eight registered American Quarter Horses.  These horses went on to either race or perform in the show ring.

Briefly retired during the 1980s, Mixer resumed his artistic productions in the mid-1990s, working from a studio near Arcadia, Okla.