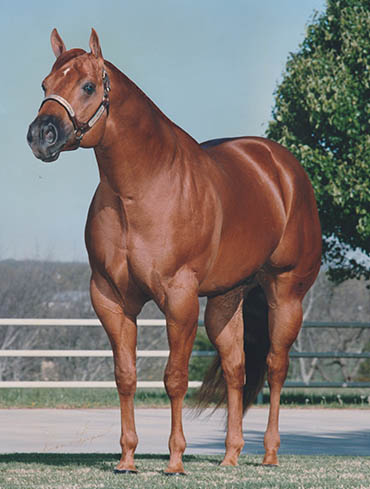 When you look at a horse’s pedigree and see some of the most influential names in the Quarter Horse world for a half-century, you naturally assume the horse must be an outstanding individual.

Such is the fact for the 1993 sorrel stallion bred by Sonny Thomison and Ray Logan of Kechi, Kansas.  His bloodline trace back to Big Step, Three Bars, Impressive, Conclusive and Kid Clu. Perpetualism was bred to be royalty.

As a weanling in October, 1993, he was sold to Rose Poindexter of Calera, OK.  In November of 1994, Jerry Wells saw that royal potential in him.  One of his customers at the time, Joan Crews Hoyt of San Angelo, TX, purchased him with the intention that Jerry would buy him from her at a later time. In March, 1995, Wells purchased Perpetualism at the same price that Joan had paid and he now was the sole owner.

In January, 2002, Jerry’s health forced him to sell Perpetualism.  Wayne and Rebecca Halvorson arranged for the stallion to be purchased by Cal and Rosemarie Loree, Loree Quarter Horses in Guthrie, Oklahoma.  In January, 2005, Ed Melzer of Guthrie, became a partnership with Cal Loree on ownership of the stallion.  Wayne Halvorson was the breeding manager of Perpetualism on behalf of Loree Quarter Horses, until the stallion died on October 4, 2006.

Perp, as everyone called him, loved treats and probably was the only horse that Jerry Wells ever fed treats to.  He could see that sack coming towards him and would whinny, and you knew he had to have one (per Betty Wells).  He was a very kind horse and a perfect gentleman.  He died way too early, but he left his mark.