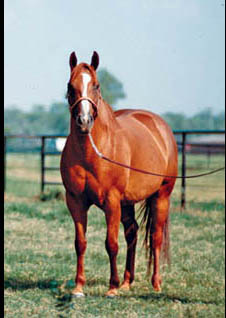 One of Robert “Bob” Moore’s best-loved homebreds was Prissy Gold Digger, a 1975 daughter of Easy Jet and out of Broom Straw by Jackstraw (TB).

Prissy went on to produce 18 foals and 17 starters that earned just under $1 million. Prissy’s daughters and granddaughters continue to influence the Bob Moore Farms brood are band, in addition to the bands of leading breeders across the country.

Prissy Gold Digger was inducted into the Oklahoma Quarter Horse Hall of Fame in 2009.