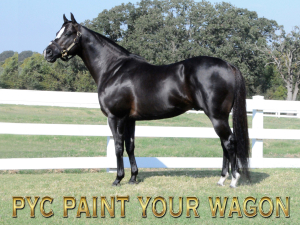 The 2003 colt hit the track running, winning the Lazy E Futurity (RG2) in his second start, only five days after his actual 2-year-old birth date, and then finishing second in the Rainbow Futurity (G1). He was second in his All American Futurity (G1) trial, but the vagary of the wind excluded him from the finals. The stallion would go on to win the Grade 1 Texas Classic Futurity and Heritage Place and Texas Classic derbies, then close his career with a narrow defeat in The Championship at Sunland Park (G1) and retired to stud with earnings of $889,581.A perpetual leading sire since his first crop hit the racetrack in 2010, PYC Paint Your Wagon has sired the earners of more than $35.4 million.