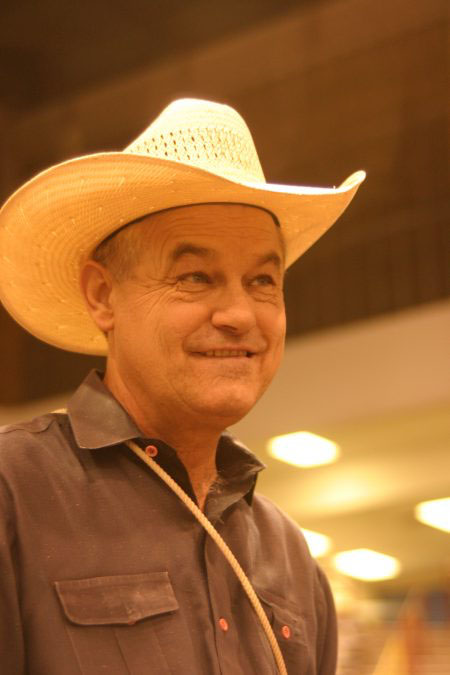 Ronnie Austin, from Ringling, Oklahoma, joined the American Quarter Horse Association in 2001 with the desire to raise good roping horses. He started that journey with the purchase of 10 brood mares, a gelding named RR Quick Silver, and a good Playgun stud from the Roos Ranch. In that same year, Ronnie made a deal with Professional Rodeo Cowboy Association cowboy Trevor Brazile to haul Deuce to several ropings. He went on to successfully qualify for the AQHA Amateur World Championship Horse Show in Oklahoma City, OK.

Ronnie owns and operates Austin Cattle Company and Austin Livestock Inc. Trucking with his wife Jessica and son Stanley. Ronnie has a daughter name Sunnie who lives in Fort Worth, TX.  His passion for roping works well with his profession of buying cattle, his favorite subject. He hits an average of 20 cattle auctions a week, which means a lot of travel and little sleep.  He uses this as an opportunity to load up his horse and hit a roping or two along the way.

In 2002, Austin placed in several shows and was enjoying the pursuit of his desire, starting his roping horses, and getting them into the hands of top tie down ropers, to help improve his Quarter Horse program. He also qualified for the AQHA World Championship Horse Show in Amateur Tie-Down Roping for the 2nd consecutive year.

In 2003, Ronnie won the first ever AQHA Bayer Select World Championship Horse Show in Amateur Tie-Down Roping on RR Quick Silver, and then sold him for $30,000. This was the beginning of starting, and selling horses from his own program.

Living his dream, Ronnie had just left the AQHA Bayer Select World Championship Show in Amarillo, not feeling his best, pushed through the discomfort, and traveled on to New Mexico to pick up his cattle. He began to realize that health wise, he was in trouble. He left the cattle to be transported by friends, loaded his horses and returned to Oklahoma. A trip to the doctor’s office revealed the diagnosis of Leukemia, to Ronnie and his wife Jessica. The doctors said that the cancer could not be killed and an experimental treatment, was the only option for survival. It was a tough battle, but the cancer is in remission.

Through hard work, faith and internal fortitude, Ronnie made his way back to the roping world. In 2004, he was crowned AQHA World Champion on CNN Smart Gunner, and AQHA Reserve World Champion on RR Sonita Norbert.  He came back to win the AQHA Adequan Select World Champions in Amateur Tie-Down Roping in 2006 and 2007.

According to Brian Caldwell, “Ronnie is a very unique individual who is a great role model and a true caretaker of the cowboy and western heritage beliefs and work ethic. He loves his horses and the State of Oklahoma with a passion that cannot be easily out done. He gets up every day and works hard at every aspect of his life with a passion that only a man who has faced what he has and overcome could”.

Ronnie will tell you, “God is good”! Surviving, and thriving, through difficulties, Austin is the essence of a good man, and a great horseman. He represents the spirit of a man, who is good for the Oklahoma Quarter Horse Industry.