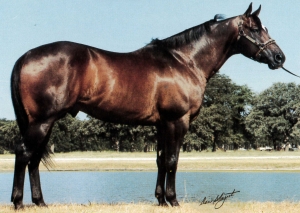 Through his friend Dale Robertson, Henry Bowlan met an Arizona man named Mike Levis who was looking for someone to show horses for him. Levis and Henry and Linda Bowlan hit the big time in 1976 when a Lady Bugs Moon colt named Shawne Bug won the $100,548 Blue Ribbon Futurity.

The 1974 brown colt started a dozen times in that year, winning its Blue Ribbon Futurity trial on January 1 and nine days later coming back to win the final.  The day they won the final, they ran five consolations for the Blue Ribbon Futurity. Trainer Merle Fitzgerald put Jim Rosencutter in the saddle that day at Sallisaw, and they beat Lord Winsalot, the 1976 Champion two-year-old who was ridden by a young jockey named Jacky Martin.

The stalwart Oklahoma-bred Shawne Bug would earn more than $180,000 as a three-year-old in 1977.   With a bankroll of $277,000 when he retired, he stood at stud at Shawnee Farms in Tecumseh for a fee of $750 under the guidance of Henry and Linda Bowlan and Dr. Leon Self. After the passing of Mike Levis, they had purchased Shawne Bug from the Levis Estate. Mari George, the Indiana woman who ran Indianapolis Motor Speedway, became a partner with the Bowlans on Shawne Bug.

Shawne Bug put several big runners on the track.  His son Corporate Bug won the Rainbow Derby at Ruidoso and then went to Hollywood Park and placed in the Dash For Cash Derby and two other stakes.  Painted Bug earned nearly $275,000 at Ruidoso, Turf Paradise, Santa Fe, Blue Ribbon, Sunland, Trinity Meadows, and Los Alamitos.  When Painted Bug was bred to Beduino in 1986, she produced a filly named Strawberry Silk who won the 1989 All-American Futurity.  Strawberry Silk’s son Stoli would win the All-American Derby and become a prominent sire, carrying on the blood of Shawne Bug. Shawne Bug’s runners hit it big and made nearly $5 million.

Shawne Bug was euthanized on February 26, 2000, following complications of a stroke. He was laid to rest on the grounds of Bowlan Farms in Tecumseh, Oklahoma, where he spent the majority of his breeding career. He was also a strong sire and grandsire of outstanding barrel horses. He made a definite impact on both barrel and racehorse industries.